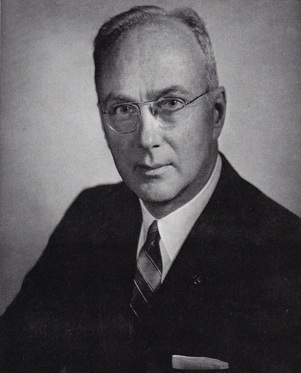 On November 13, 1976, one of the most distinguished and devoted members of our Grand Lodge, was called to his Eternal Reward. His quiet, dignified, but effective, presence was felt by the large circle of friends whose lives he had touched.

Most Worshipful Albert Neill Osgood was born in Calais, Maine, on June 11, 1898, the son o{ Charles Edward Osgood and Blanche Potter Osgood. He prepared for Harvard at Phillips Exeter Academy where he was graduated in the Class o{ 1917 and he received his Bachelor's degree at Harvard in the Class oI 1921, after having served in World War I as a Second Lieutenant of Infantry.

In December, 1920, prior to his graduation at Harvard, he became affiliated with the C.E. Osgood Company, a {amily retail furniture business in Boston, as Secretary to the President. He was elected President in 1925 and his business interests were centered there for many years until his retirement. He was married on February 27, 1926 to Dorothy Jaeger of Columbus, Ohio, who survives him.

Most Worshipful Brother Osgood was raised in Aberdour Lodge on September 11, 1928 and was immediately appointed in line by a Worshipful Master who at that early date recognized his Masonic potential. After having served as Master in 1933 and in 1934, he was elected Treasurer, an office in which he faithfully served the Lodge for twenty-six years.

All during his subsequent active Grand Lodge career, he continued to devote himself faithfully with unstinting devotion to his Blue Lodge affiliations. It is the firm convicrion of his many friends that no Massachusetts Mason was ever held in higher regard among the Blue Lodges in which he held active membership and the sixteen other Blue Lodges who had honored him with honorary membership. lt is our belief that this opinion is also held by other Massachusetts Masons.

He was launched on a distinguished Grand Lodge career when he was elected Master of the Seventh Lodge of Instruction in 1936. He served as District Deputy Grand Master of the Boston Second Masonic District by appointment of Most Worshipful Joseph Earl Perry in 1938 and 1939 and in 1955 as Deputy Grand Master of the Grand Lodge by appointment of Most Worshipful Whitfield W. Johnson. After his election as Grand f'reasurer in 1969, he met ex officio with the Board of Directors until 1973 when he was elected a Director, both of which offices he held until the time of his death. He was also Treasurer of the Masonic Education and Charity Trust from 1969 until his death.

Our Grand Lodge honored him in 1950 by awarding him the Joseph Warren Distinguished Service Medal and in 1955 with the Henry Price Medal, the highest award oI our Grand Lodge. In December 1962, he was elected our Grand Master, an office in which he served Massachusetts Masonry with great distinction and dignity during the years 1963, 1964 and 1965. In 1965, the Grand Lodge of Connecticut honored him "for his outstanding achievements as a man and as a Mason and in recognition of his unselfish and dedicated service to the Masonic Fraternity", by awarding him their Distinguished Service Award, the Pierpont Edwards Medal.

With all this, he found time to devote to Collateral Masonic Bodies. He was Exalted in Saint Andrew's Royal Arch Chapter on June 4, 1952, greeted in Boston Council Royal and Select Masters on August 4, 1962 and knighted in Boston Commandery No. 2. He subsequently in 1962 transferred his Commandery membership to Saint Bernar.d Commandery No. 12, in which he served as Prelate for many years until he was elected Commander in May 1975, an office which he relinquished in May 1976, only a few months before his death. He received his Scottish Rite degrees in the Valley of Boston in December 1928 and was honored by the Supreme Council which conferred upon him the 33rd Degree (Honorary) in 1964. In September, less than two months prior to his death, he attended the Supreme Council meeting in Milwaukee.

In the afrliated and related Masonic bodies, he became a member of Aleppo Temple, A.A.O.N.M.S. in 1929. He was elected an Active Member of the International Supreme Council of the Order of DeMolay and appointed Executive Officer for Massachusetts in 1967, which office he held until 1973 when he resigned and was elected an Emeritus Member. He was the recipient of the Honorary Legion of Honor in 1963.

He was also a member of Bay State Conclave, Red Cross of Constantine of which he was a Past Sovereign. He was further honored by having been elected a member of Massachusetts College Societas Rosecruciana in Civitatibus Foederatis, Boston Court No. 103, the Royal Order of Jesters; the Royal Order of Scotland; and New England Chapter No. 12, National fojonrners. He had also been elected a member of Damascus Tabernacle No. XXVI, Knight Templar Priests, and would have been inducted into membership a week to the day from the date of his death.

Despite his extensive Masonic activities and his active business career, he found ample time to devote to his church and to public service activities. He was a member of the Harvard Congregational Church in Brookline which he served as Deacon for many years. He was Treasurer and Director of the Congregational Board of Pastoral Supply. After moving from Brookline to Wellesley, he and his family continued to travel to Brookline every Sunday to worship at the church which he served so faithfully but he later transferred his membership to the Wellesley Hills Congregational Church which he served with equal devotion and fidelity. He was for many years a Corporator of the Eliot Savings Bank of Boston and had been a Director of the Volunteer Co-operative Bank of Boston since June 23, 1930 of which he was also Vice President since January 21, 1946 until his retirement on January 24, 1974.

In addition to his wife, he is survived by two sons, Charles E. of Kearsarge, New Hampshire and A. Neill, Jr. of Natick, Massachusetts, and a daughter, Dorothy Barghoorn of Carlyle, Massachusetts. Masonic funeral services were held at the Eaton Funeral Home on Monday evening, November 15, and a memorial service was held in the Wellesley Hills Congregational Church on Tuesday, November 16, prior to which interment services were privately held in Woodlawn Cemetery in Wellesley.

It has been sincerely felt among his many Masonic {riends that his kindness, consideration, and sincere thoughtfulness as a man and Mason were exceeded by none and equaled by few. He epitomized the purity of life and conduct, both as a man and a Mason, that should inspire us all to emulate. The affection in which he was held by the Masonic Fraternity, not only in Massachusetts but also in other Grand Lodges, is the greatest tribute that can ever be paid to one who has served Freemasonry with such distinction and devotion. The Members o{ this Committee appointed by the Grand Master to prepare and present this Memorial feel signally honored to have the privilege of affixing their signatures to this sincere but grossly inadequate tribute to a man and Mason whom they held in highest esteem and fraternal affection.

I was anxious this year to select one who to all intents and purposes had the same attitude towards Blue Lodges that 1 have towards Blue Lodges; and although the Brother whom I have appointed belongs to the Scottish Rite Bodies and the York Rite Bodies, his activity Masonically over a long period of years has been confined largely, perhaps almost exclusively, to Blue Lodge Freemasonry. He has been active and a very energetic worker for a great many years. I remember very distinctly when I was a very young officer in The Harvard Lodge of going to an exemplification and seeing this Brother characteristically exemplifying the lecture. Perhaps he was not even an officer of his Lodge at that time, but he was a willing worker and came to the lecture for the purpose of exemplifying the lectures which to our visiting Brothers means, of course, the questions and answers, catechisms, or whatever it is called in your respective jurisdictions.He is a Past Master of Aberdour Lodge. He is a Past District Deputy Grand Master of the Boston Second Masonic District. But apart from that, he has been active in all phases of community activity. He has been the President and General Manager of the C. E. Osgood Furniture Company for a great many years. He has been a trustee; and he is now a trustee of the Eliot Savings Bank. He is a director and vice president of the Volunteer Cooperative Bank. He is an active churchman. He is the kind of man who is called upon by his church when the important task of selecting a minister is before the church; and he has been very recently engaged in that kind of activity. He is the kind of man who, when the Board of Directors of a good-sized cooperative bank wish to select one of their number to assume a little bit more responsibility in the details of administration of a bank, is elected the Vice President without compensation except the compensation that comes from doing a task a little bit more carefully and a little bit more conscientiously than the average director can do. He is the kind of man who, when a Grand Master is looking for a Deputy Grand Master, immediately says, “Oh no, I am not the caliber of a man who should be Deputy Grand Master of our Grand Lodge.” He is the kind of man, however, who is willing to accept when asked to do any task that is set before him, even though it be the task of being Deputy Grand Master of our Grand Lodge. It is with a great sense of personal pride and satisfaction that I present to you Right Worshipful A Neill Osgood as Deputy Grand Master for the coming year. (Applause)

Most Worshipful Grand Master, Distinguished Guests, and my Brethren:

Until recently I considered myself a person of retiring disposition, not modest, merely shy. However, when I found I was committed to being presented here tonight, I thought it well to re-examine this belief. Perhaps, I thought hopefully, I had been fooling myself. Unfortunately, my opinion has not greatly changed. I would find it possible to forego merely the honor of holding office, but I could not and would not refuse the opportunity to serve this Grand Master in any capacity he might wish. Over the years he has earned my strong admiration. He has always had my unqualified respect, and with that respect and admiration is a warmer feeling which I do not know how to describe except as affection. I think these things I have just said now are perhaps very close to the hearts of every officer who has been installed today. Therefore, I will serve him gladly to the best of my ability, and this I say also for them; and both I and my Brother Officers hope that our abilities will be sufficient for his needs. (Applause)