INSTALLATION AT THE LODGE HALL IN CONCEPCIÓN, SEPTEMBER 1909

This magnificent Masonic Temple, erected during 1904 in Barros Arana St., Concepción — the southern Capital of the Republic of Chili — must be classed among the finest and most imposing buildings used by the Craft in South America.

Freemasonry in Concepción has made steady progress during the past quarter of a century. Although the early Lodges "La Estrella de Chili" (under Charter of the Grand Lodge of Peru, 1836), and "La Aurora de Chile" (under Charter of the Grand Orient of France, 1860), soon died out, Saint John's Lodge formed in March, 1885, by English-speaking Masons who secured a Charter from the M. W. Grand Lodge of Massachusetts, continues to flourish, maintaining on its list of active members close upon one hundred Brethren, while the Chilian Lodge, "Paz y Concordia" (under the Jurisdiction of the Grand Lodge of Chile), and the German Lodge. "Glück Auf" (Grand Lodge of Hamburg), are powerful and of far-reaching influence.

On the evening of Tuesday, September 7th, 1909, there was a great gathering of the Fraternity within this gorgeous Temple, the object of reunion being the Annual Installation of the Officers of Saint John's Lodge, and the fact that no less than twenty-six different Lodges working under the Jurisdiction of England, Scotland, Germany, Argentina. Chile and Peru were there represented is a striking witness to the prevalence of harmony and brotherly love, as well as to the strength of the Craft in the South of Chile.

'The D. D. G. M., after admitting these officers into their respective stations, and delivering to each his charge, addressed the newly-installed Master, and stated that had it been possible for the M. W. Grand Master himself to be present, he would no doubt have drawn such designs upon the Trestle-board as would keep all good and true Masons very well occupied. As his substitute, however, instead of doing this, he would explain to the Brethren present "Certain Objections made to Freemasonry, and the value of its proper interpretation." This he accomplished in a most emphatic and convincing style — receiving the hearty thanks of his entire audience for so notable and instructive an exposition.

Having received back the Charter in perfect condition, he bestowed the Past Master's Diploma on the W. Bro. David James, and pinned upon his breast a magnificent Past Master's Jewel — the gift of the members of Saint John's Lodge, in token of their high appreciation for Masonic Duties wisely and nobly executed.

The W. Master, having thanked the numerous visiting Dignitaries and Brethren for their kindly greeting and expressions of hearty good-will towards Saint John's Lodge, read several telegrams of congratulation received—among which was one conveying the sincere good wishes of the Grand Master of Chilian Freemasonry —; and after demonstrating the proficiency of his Officers to the profound satisfaction of the D. D. G. M.. caused the Alms-bag to be circulated, and closed the Lodge in due and ancient form harmony prevailing.

A brief but animated interval ensued before the visitors were conducted by the Brethren to the banqueting hall — which was beautifully decorated and presented a magnificent spectacle. Here a very happy and enjoyable time was spent, the hours passing away almost imperceptibly under the genial influence of truly Masonic friendship and conviviality.

In proposing the first toast of the evening in honor of the "Most Worshipful Grand Lodge of Massachusetts," the W. M., Bro. Elkin, briefly reminded the Brethren, in an earnest and eloquent address, of the remarkable advantages and results of genuine Masonic Companionship, and with his usual power brought home most forcibly to the minds of all present the fact that doing good for the Order is not the outcome of mere sentiment but of Character. He bade them remember that the Epistle of Freemasonry to be read by the profane today must be written on the lives of those to whom we valuable tenets of our Order have been confided, and whose character and conduct, day by day, embodies and expresses in no uncertain way the priceless principles we have accepted. 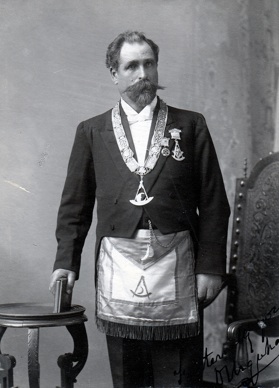 This was what made Freemasonry such a tremendous power; and he was sure that they one and all would not fail to maintain the same high standard as heretofore for the honor of Freemasonry in general and Saint John's Lodge in particular. After a touching reference to his worthy friend and Colleague, P. M., Revd. Frank Thompson who had installed him as W. M. five years before, he proposed in felicitous terms the toast of the Grand Lodge so ably represented by R. W., Bro. David Urquhart who had performed the same office on his behalf that evening, and whose presence among them was doubly welcome inasmuch as his trip to Europe had prevented him from attending last year, when they all knew what a warm corner he had in his heart for them, and could rest assured that under his guidance and counsel Saint John's Lodge would lose nothing of its former splendour. This toast was most enthusiastically honored.

The D. D. G. M. in reply made a most thrilling speech which fairly electrified the Brethren. He caused great amusement when he mentioned how he had mightily astonished several good Masons in other lands, whose geography was rather defective and whose ideas about Freemasonry in Chile were deliciously peculiar. But the climax was reached when he announced that he had securely nailed the printed List of Officers and Brethren of Saint John's Lodge, Concepción, upon the walls of that celebrated Lodge in bonnie Scotland where Robbie Burns had been made a Mason. There being a considerable number of loyal Brother Scots present this information provoked indescribable enthusiasm, during which the toast of the "Worshipful Master and Officers" was given with musical honors.

Other toasts followed in quick succession: "The Grand Lodge of Chile" proposed by P. M., Bro. Wm. Day was received with the Chilian National Anthem. "The Grand Lodge of Hamburg," accompanied by the National Hymn of Germany, was offered by P. M., Bro. David James, while the strains of "God Save the King," made the hall re-echo as P. M. Bro. W. M. Keay rose and gave "The Grand Lodge of England." P. M. Bro. John Patillo evoked unbounded hilarity with his humorous introduction, inviting the company to rise and honor the "Visiting Brethren" with the usual honors, and S. W. Bro. W. Brower in submitting the toast, "The Past Masters" made several excellent remarks which were very highly appreciated.

Owing perchance to the genial influence prevailing or perchance by design, a most amusing incident occurred during the festivities, the W. M. of the German Lodge "Glück Auf" unwittingly responded on behalf of the Chilian Brethren of Paz y Concordia Lodge — an unexpected kindness which the Chilian W. M. lost no time in reciprocating; but confessing his inability to speak German and his utter ignorance of Esperanto, he returned the compliment with interest on behalf of the Brethren from the Vaterland in the choicest vernacular.

Acting upon a happy inspiration it was next proposed that the Craft, assembled round the festive board should empty all that remained in their pockets towards helping the Masonic School established at Valparaiso, in which noble Institution R. W. Bro. Urquhart is so deeply interested and over which he presides with such self-sacrificing efforts. This the W. M., Bro. Elkin was only too delighted to sanction, the Illustrious Delegate of the Grand Lodge of Chile and the W. M. of "Glück Auf" kindly volunteering to act as Stewards in so worthy a cause. The sum of $220 was quickly harvested, and a few heart-stirring  words of thanks from the D. D. G. M. made everyone feel happier than before just by proving the truth of the  Sacred Monition "It is better to give than to receive."

Yet another unlooked for surprise was forthcoming, all the Chilian and German Brethren rising and singing in the good old English style "For he's a Jolly Good fellow," which caused the W. M. of Saint John's Lodge to remark, amid hearty laughter, that if this sort of thing were going to continue we should have to adopt that time-honored ditty as the Masonic Nationa; Anthem.

The musical part of the Festival followed, being admirably rendered by Bros. Steel, Lawford, Wrigley, Stafford, Jarvis and others, until the united rendering of "Auld Lang Syne" brought a very pleasant and enjoyable evening to a close.

The brethren of St. John's Lodge had again the pleasure of welcoming D. D. G. M., R. W. Bro. David Urquhart at the Installation of Officers elected for the year 1910-1911.

The D. D. G. M. then addressed the Brethren individually and generally on their duties in respect to St. John's Lodge of Freemasonry. During the ceremony a welcome interruption arose in the arrival of R. W. Bro. Nemesio Basso acting as Special Delegate on behalf of the G. L. of Chile.

W. B. James arose to thank the D. D. G. M.. and in a few words of retrospect recalled the losses suffered by the Lodge during the past year through the death of four members, including that of W. M., W. B. W. H. Elkin, P. M., whose loss they had found irreparable. He also thanked the visiting brethren for their presence and offered through them the fraternal greetings of St. John's Lodge to their respective Lodges.

W. Bro. Koster and W. Bro. Cardenas then tendered in felicitous language the congratulations of their respective Lodges, and R. W. B. Basso conveyed the assurance of fraternal good wishes from the M. W. G. M. of the G. L. of Chile. W. Bro. James drew attention to the fact that the Lodge was favored with a visit from W. B. E. Serra who had come to this country with the Italian Cruiser Etruria in celebration of the Chilian Centenary, and asked him to convey the fraternal regard of St. John's to his Lodge.

W. Bro. Serra responded in musical Italian which could readily he followed by the "Spanish understanding" members, and there being nothing further offered the W. M. then informed the Brethren that they made it a custom on the visit of our D. D. G. M. to give a subscription for the benefit of Blas Cuevas School which he has presided over for so many years and which gives a free education to upwards of 250 scholars — the sum of $62.00 was subscribed for this object.

The Lodge was then closed with due observance of our ancient forms and ceremonies.

The Brethren then adjourned to the Banquet Room where a welcome repast awaited, but in sympathy with the National mourning at the recent deaths of the President and Vice-President, the musical part of the programme had to he eliminated and the usual toasts were proposed and responded to with what enthusiasm could be raised under the circumstances, the intervals being spent in discussions and comparison of matters Masonic, we hope to the mutual benefit of all.