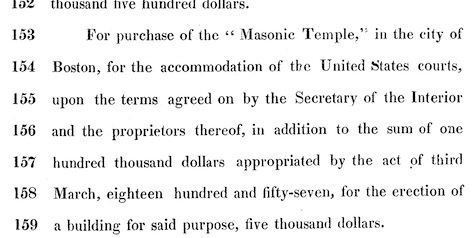 Excerpt from HR306 of June 1858,
Authorizing government purchase of the Temple

In accordance with a suggestion of the present Grand Master, an effort was made on the 27th December, to revive in Boston, the festival of St. John the Evangelist, an anniversary which was formerly and with great regularity celebrated by the Masonic Fraternity. Instructions were accordingly given to the Grand Stewards to make the necessary arrangements for the occasion. Under their direction, tables were laid in the upper room of Nassau Hall, with covers for one hundred guests, for whom an ample and elegant supper was provided by the great caterer of the present day. The business of the day had been gone through with, as provided in the Constitutions; the Brethren had witnessed the usual exemplification of the work by the Grand Lecturers; the usual collation for the non-resident members had been provided and partaken of; and the installation of the officers of the Grand Lodge, in ample form, had completed the strictly Masonic exercises of the day. When the meeting of the Grand Lodge closed, the Brethren present, nearly to the full number provided for, repaired to the banquet-hall. The Grand Master took his seat at the head of the tables in the East; the Senior Grand Warden in the West, and the Junior Grand Warden in the South — and the feast went on. The Brethren, after the labors of the day, found their appetites, and their appetites found, in the refreshments provided, all that reasonable men and Masons could ask. At the invitation of the Grand Master, and after asking a blessing by the Rev. Bro. Henry A. Miles, D. D., the feast was partaken of to the entire satisfaction of the company present The Grand Master then dismissed the servants from the hall, and opened in due form, with such ceremonies as properly pertain thereto, a "Table Lodge," in the work of which he was assisted by the Senior and Junior Wardens.

The Grand Master on taking the Chair delivered an exceedingly appropriate and interesting address, the publication of which, for the want of room, we are obliged to defer until next month. At the conclusion of his remarks, the following toast was announced by W. Bro. W. W. Wheildon, as toast-master:—

The next sentiment announced, was as follows:—

The next toast was as follows:—

The next toast was—

The toast-master then read the following:—

The following toast was then announced :—

A toast complimentary to the patriotic efforts and services of the Corresponding Grand Secretary, was given by the toast-master and responded to in a very happy and suitable manner by Hon. Bro. G. Washington Warren.

The following toast was read :—

The following was then given:—

"All Brethren of the Ancient and honorable Society of Free and Accepted Masons, who are in this department, are Notifyed that the feast of St. John will be celebrated at Hacker's Hall, In Providence, on Monday, the 28th Inst. All Visiting Brethren who are desirous of Attending the Festival are Notifyed by the Request of the Right Worshipfull Master, I. Warden, that a Special Lodge will be held at the Court House, in Providence, on Monday Evening next, where such as have not been Introduced to the Lodge in this place, will have an Opty which will prevent the Troble that must be Occationed by their Introduction on the Day of the festival. The Commander-in-Chief gives permission to all Officers who belong to that fraternity to attend on Monday next, and also on the day of the festival."

Copied from the original Record of Josiah Fletcher Adjutant in the Regiment of Col. Jacobs, of Massachusetts, ami presented to the Grand Lodge of Massachusetts, at the Feast of St. John the Evangelist, al Nassau Hall, Boston, December 27, A. L. 6888, by Brother David Pulsifer.

A few other toasts were given, and various recreative ceremonies introduaed during the evening, tending to promote the general joy of the occasion, and mark it as a success.

The company broke up at about 11 o'clock, after having enjoyed a very agreeable evening, in which hilarity was mingled with brotherly feelings, and recreation with instruction. It is hoped that the festivity of St. John the Evangelist, so long kept up in the olden time and so happily revived in the presont may now be continued without interruption.

This district layout is based on the O.P. edition of the Proceedings. However, this publication is riddled with errors, and some adjustment was necessary.
'(Note: There were 12 Districts in 1858, plus a special area for Chile.)