This Grand Body held its quarterly communication in this city on the 9th ult. The most important Business transacted was the adoption of a report on the unfortunate difficulties which have arisen in the Grand Lodge of California. The report will be found in subsequent pages, and to it the reader is referred.

A report adverse to the reduction of the present fees paid by the Lodges to the Grand Lodge was also adopted by a nearly unanimous vote—three Brethren only voting in the negative.

A report was also adopted, declining to comply with a request to issue Circulars to the Lodges under the jurisdiction, 'soliciting pecuniary aid in the erection of the National Monument at Washington, for the reason that "this Grand Lodge has heretofore contributed from its funds towards the erection of a Masonic Monument in memory of our illustrious Brother (Washington); and has also recommended to the Lodges under its jurisdiction to do likewise."

The M. W. Grand Master announced in appropriate terms, the death of the R. W. Ferdinand E. White, P. D. Grand Master, and suitable resolutions, expressive of the love and esteem in which the deceased was held by his Brethren, were adopted. The death of the excellent and faithful Brother, Josiah Baldwin, late Grand Tyler, was noticed in appropriate terms. The resolutions adopted on the occasion, will be found on a succeeding page.

A charter was ordered to be issued to Baalbec Lodge tit East Boston. This Lodge has been working the past year under dispensation, and its returns show, with eminent success.

The meeting was an active one, and a large amount of local business was transacted, and this,—with the slight exception before noticed,—with entire unanimity,—as is usual in this Grand Lodge. At the installation of the officers of the Grand Lodge of Massachusetts on the thirtieth of December, 1852, an incident occurred which we do not remember to have seen reported except in the pub lished Proceedings. The late Bishop Randall had that evening been installed for the first time as Grand Master. At the conclusion of the ceremonies, he introduced to the Grand Lodge the Hon. Myron Lawrence, of the State Senate. On rising, the Hon. Brother respectfully acknowledged the courtesy of the chair — referred to his former connection with the Masonic Fraternity of the Commonwealth, and with the Grand Lodge, as one of its District Deputy Grand Masters — said that he had not been in a Lodge for many years — that in the stormy times of anti-Masonry he had contended against the enemies of the Institution with his "armor on"; and that, though at last, in common with all his Brethren in the section of the State in which he resided, he was forced to yield in the unequal contest, he did so with his flag still flying over his head. But the immediate object of his rising, he said, was to exhibit to the Grand Lodge an ancient Masonic Jewel, which had just been handed to him by his Brother Col. Flores, Junior Grand Warden of the Grand Lodge of Peru (then present), and which had been worn by Gen. Washington as the presiding officer of a Lodge in the army of the Revolution. The history of the Jewel, as the Hon. Brother gave it, on the authority of Brother Flores, is briefly as follows. He said it originally belonged to Brother Bystrzanowfski, a Polish soldier, who came over to this country about the time that Kosciusko arrived here and immediately entered and served in the American army under Gen. Washington. Being a Mason, he was associated with Washington in one of the army Lodges having authority to confer the Mark degree, and over which Washington presided for a time as Master. This Jewel, being the only one in the possession of the Brethren appropriate to a Mark Lodge, was loaned by its owner to Gen. Washington, and was worn by him at the meetings of the Lodge. On the disbanding of the army, Washington returned it with a complimentary letter. At his death, the Polish Brother bequeathed it to his children, through whom it was transmitted to one of his grandsons, who was present in Grand Lodge when this relation was made.

In his Address at the installation of officers in the following year. Grand Master Randall thus announced the death of Brother Lawrence: " When I turn from these posts of active duty [the offices of Senior Grand Warden and Grand Lecturer made vacant by death] to the list, I am reminded of one, who was with us at the installation of the officers of this Grand Lodge a year ago. Those who were present on that occasion well remember the stirring tones of his eloquence as he spoke of the days when he bore the banner of our Order, in the face of the foe that threatened to desecrate and destroy all that pertained to the distinctive principles of this ancient Frater nity. He held the responsible office of District Deputy Grand Master when the violent storm of persecution burst forth anil raged with terrific fury. Undaunted, he did his duty, and he did it well. He, too, has finished his laliors. His body has been committed to the dust as it was, and his soul hath gone to God who gave it." 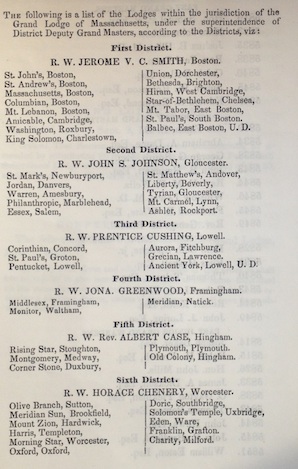 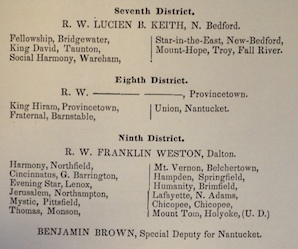