DECLARATION OF THE FREEMASONS OF BOSTON AND VICINITY 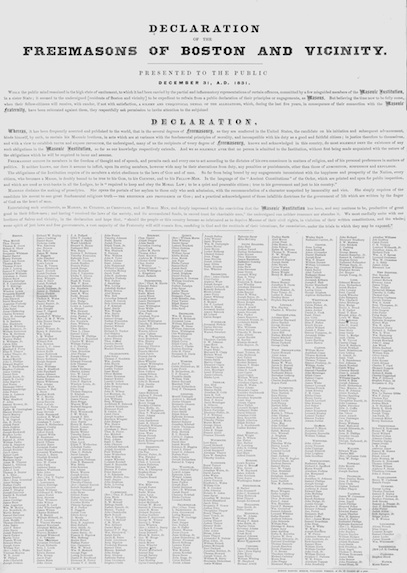 Click here for a larger view of the document.

While the public mind remained in the high state of excitement, to which it had been carried by the partial and inflammatory representations of certain offences, committed by a few misguided members of the MASONIC INSTITUTION, in a sister State; it seemed to the undersigned (residents of Boston and vicinity) to be expedient to refrain from a public declaration of their principles or engagements, as MASONS. But believing the time now to be fully come when their fellow citizens will receive, with candor, if not with satisfaction, A SOLEMN AND UNEQUIVOCAL DENIAL OF THE ALLEGATIONS, which, during the last five years, in consequence of their connection with the MASONIC FRATERNITY, have been reiterated against them, they respectfully ask permission to invite attention to the subjoined declaration.

WHEREAS, it has been frequently asserted and published to the world, that in the several degrees of FREEMASONRY, as they are conferred in the United States, the candidate on his initiation and subsequent advancement binds himself, by oath, to sustain his Masonic brethren in acts which are at variance with the fundamental principles of morality, and incompatible with his duty as a good and faithful citizen; in justice, therefore, to themselves, and with a view to establish TRUTH and expose IMPOSITION, the undersigned, many of us the recipients of every degree of FREEMASONRY known and acknowledged in this country, do most SOLEMNLY DENY the existence of any such obligations in the MASONIC INSTITUTION, so far as our knowledge respectively extends. And as we SOLEMNLY AVER that no person is admitted to the Institution, without first being made acquainted with the nature of the obligations which he will be required to incur and assume.

FREEMASONRY secures its members in the freedom of thought and of speech, and permits each and every one to act according to the dictates of his own conscience in matters of religion, and of his personal preferences in matters of politics. It neither knows, nor does it assume to inflict, upon its erring members, however wide may be their aberrations from duty, any penalties or punishments, other than those of ADMONITION, SUSPENSION and EXPULSION.

The obligations of the Institution require of its members a strict obedience to the laws of GOD and of man. So far from being bound by any engagements inconsistent with the happiness and prosperity of the Nation, every citizen who becomes a Mason is doubly bound to be true to his GOD, to his COUNTRY, and to his FELLOW-MEN. In the language of the "Ancient Constitutions" of the Order, which are printed and open for public inspection, and which are used as text-books in all the Lodges, he is "required to keep and obey the MORAL LAW; to be a quiet and peaceable citizen; true to his government and just to his country."

MASONRY disdains the making of proselytes. She opens the portals of her asylum to those only who seek admission, with the recommendation by a character unspotted by immorality and vice. She simply requires of the candidate his assent to one great fundamental, religious truth - THE EXISTENCE AND PROVIDENCE OF GOD - and a practical acknowledgement of those infallible doctrines for the government of life which are written by the finger of God on the heart of man.

Entertaining such sentiments as MASONS, as CITIZENS, as CHRISTIANS, and as MORAL MEN, and deeply impressed with the conviction that the MASONIC INSTITUTION has been, and may continue to be, productive of great good to their fellow-men; and having "received the laws of society and its accumulated funds, in sacred trust for charitable uses," the undersigned can neither renounce nor abandon it. We most cordially unite with our brethren of Salem and vicinity, in the declaration and hope that, "should the people of this country become so infatuated as to deprive Masons of their civil rights, in violation of their written constitutions and the wholesome spirit of just laws and free governments, a vast majority of the Fraternity will still remain firm, confiding in God and rectitude of their intentions for consolation, under the trials to which they may be exposed."

The 1881 Proceedings contains a listing of the surviving signatories fifty years afterward.