Difference between revisions of "Scouters"

This lodge's charter members are all Eagle Scouts or recipients of the Beard award. 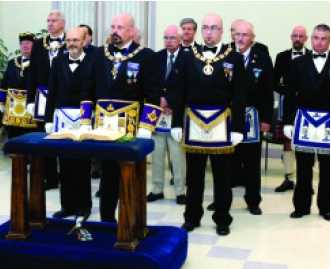 Petitioning brothers confirm their selection of Rt. Wor. Jay A. Jolicoeur as their first master.

Another new Masonic lodge has been formed in Massachusetts. The Scouters Lodge was instituted on July 27, 2010; the lodge will hold its meetings for the next year in Holden under dispensation from Grand Lodge. The institution ceremony, rarely seen in recent years, was performed by Rt. Wor. District Deputy Grand Master John K. Andrews.

Rt. Wor. Jay A. Jolicoeur (who is currently the deputy grand master) was designated by the Grand Master to serve as master of Scouters Lodge under dispensation.

The newly formed lodge will be open to members who  are former Eagle Scouts in the Boy Scouts of America organization.