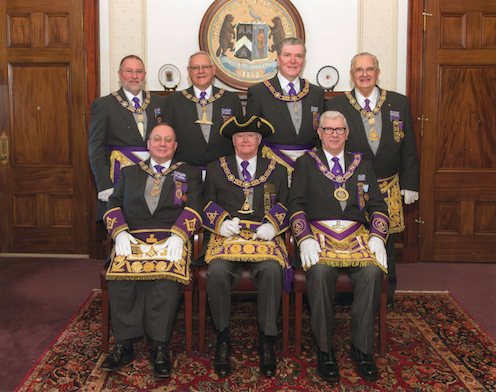 A portrait of the Grand Master and officers appeared on the frontispiece and above.

Note: the revised version of the Grand Constitutions is the new 2016 edition.

"What a glorious day we have here today, to celebrate such an important historical occasion. I want to thank all of you for coming here today; I especially want to thank the students for joining us; thank you very much for joining us, and I’m sure you love one more day out of the building.

"I especially want to thank the Spirit of America for your performance here this morning; it was terrific.

Today we are leaving another chapter in our history books with the burial of this time capsule, containing memorabilia from 2015, and returning the contents of a time capsule from 1795 which was unearthed last year. This sliver of history was discovered on a whim during a construction project, and shocked historians and the people of the Commonwealth alike when we found it, that it was placed there by Paul Revere and Sam Adams.

"Sam Adams: one of the great names in American history. As a footnote, we made a decision as an administration to put his portrait in the Governor’s Council Chamber in the State House. When news of that was reported, I can’t tell you how many people I heard from who said, 'that’s terrific: you put the guy who created that beer up in the State House.' {Laughter}. Well, not exactly. And that’s why days like this are so important.

"The capsule was originally buried fifteen years after Massachusetts became a Commonwealth and adopted its constitution in 1780 – 235 years ago yesterday.

"For those history buffs who may be with us, and may already know, that today, June 17, 2015, is the 240th anniversary of the Battle of Bunker Hill. Now that was actually fought on Breed’s Hill, but that’s a minor and trivial point. The most important fact about that is that on that day, about twelve hundred Colonial soldiers, who were mostly farmers, merchants and local citizens, took on the biggest, brawniest, and most feared military force at that time on the face of the earth, the British navy and army. Twice, the British attacked the Colonials on Bunker Hill; and twice they were repelled. The third time they succeeded in driving the Colonial forces back into Cambridge.

"But that particular battle that day set the tone for what eventually became the victory of the people of this country in the fight for their freedom. 240 years ago today.

"Now what you just got from me was my own commentary on a big point in American history. What makes this time capsule so unusual is that it’s not an interpretation from a historian, it’s not a passage in a textbook; it’s the story that our predecessors from that revolutionary time wanted us to know and understand.

"I’ve learned in the Governor’s office that life is busy; though if you look behind me it’s pretty clear that no one is doing anything today. {Laughter}.

"As well they should be. They should be here with all of you. But the days fly by, filled with meetings, press conferences and events and sometimes you can forget how lucky we are to have a historic site like the State House right here in our back yard.

"As this time capsule is buried today, it invokes many questions for our future that can only be answered over the course of time. What will history reveal about us, about the decisions we made, the choices we made, and how we chose to live our lives? What decisions will we make with the legislature, and what will be our accomplishments? How will we aspire to be great and carry on the legacy of our forefathers and those who came before us?

"I hope that today, and the events of today, can serve as a small reminder for us to slow down and to think a bit about these questions. We have a unique opportunity here to reflect on civic service, our democracy, our history, and the ideas we debate every day as we try to shape our present and our future and to think about our own legacy.

"Thank you very much for being here; God bless America and God bless the Commonwealth."

Thank you very much, Governor, for those inspiring words. As I said earlier, we celebrate our history in Massachusetts, and what we re-inter today are not simply artifacts or historical curiosities.

220 years ago, Samuel Adams and Paul Revere climbed this hill and put these artifacts in that cornerstone. And they did select those artifacts very carefully. They were artifacts that reflected the history of this area of the world and its struggle to be independent and free. And they were really symbols that guided them in their effort in the American Revolution and in the formation of a local government here in Massachusetts. And that spirit that led to a revolution that created a country and that led to a state that led a country is still alive today.

And it’s that spirit that we commemorate today. It is that challenge to us in this generation to what we will do to make sure those principles are heard throughout the world. And it’s fair to say they have been emulated. The principles of democracy, the principles of self-representation: those are all important aspects of our history.

I’m fond of saying, “the history of Massachusetts is the history of America.” And it’s true. But it’s also true that what we started here and what our country started has spread throughout the world. Throughout the world people are into the aspects of democracy that we first embraced here. This magnificent building that has been our capitol for over 200 years – not only has it seen great deliberations affecting us, but it has been welcoming to people from all over the world: every year, over 100,000 visitors come here. They come here and marvel at our history and our commitment to individuality and freedom. I think that’s what we reaffirm today: those principles, those commitments, those issues that we hold dear.

To those who come from without Massachusetts, I invite you to leave this ceremony today with a renewed commitment in your home area or your home town to these principles. To those of you from Massachusetts, especially the students that are here today, don’t treat this building as simply a museum, a place to marvel at, a place of beauty. Treat it as a place to come to: make your voices heard. When there are issues that you feel strongly about throughout the years, come back here. Make your voices heard again and again. That is the true legacy of Revere and Adams, and all of the patriots. That is the true legacy that we continue today. That is the commitment that we must make to future generations.

Thank you very much for your attention.

Remarks by the Grand Master:

I am honored to speak here today on behalf of our 29,000 Massachusetts Freemasons. Over 1300 Masons are present to witness this glorious ceremony. I also thank all citizens of this great Commonwealth for attending these proceedings.

Today, we are living history. On July 4, 1795, 220 years ago, the Governor of Massachusetts; Samuel Adams, requested the Grand Master of Masons in Massachusetts, Most Worshipful Paul Revere, to consecrate the construction of a State House, and perform an appropriate ceremony. It is humbling to stand here in the midst of our Governor, Secretary of the Commonwealth, members of the Legislature, reverend clergy and Grand Lodge Officers and engage in a truly worthwhile event – the re-deposit of the State House time capsule.

The ceremony you are about to witness is filled with symbolism and significance. Since ancient times, the laying of a public building’s cornerstone has been celebrated.

When a man is made a Mason, he is initially placed in the northeast corner of a Lodge room. This location is the threshold between the north, a place of perpetual darkness and the east, a place of light.

This threshold between darkness and light serves as the midpoint between ignorance and wisdom, barbarity and civilization; and it represents the beginning of that journey from east to west in pursuit of more: more light, more knowledge, and more liberty. If is for these reasons that a building’s cornerstone is also ideally placed in the northeast corner.

As Freemasons, we have a proud history of performing cornerstone ceremonies. This ceremony is identical to the one Paul Revere performed here in 1795, and it is an integral part of our national history.

An honored Mason in Virginia, George Washington performed the cornerstone ceremony at the United States Capitol building in 1793. The Grand Lodge of Washington D.C. performed it at the Smithsonian in 1847 and at the Washington Monument in 1848.

Here in Massachusetts, Masons have laid cornerstones not only for this State House; but also for Massachusetts General Hospital here in Boston, the Bunker Hill Monument in Charlestown, the Forefathers Monument in Plymouth, and several town halls, churches, libraries, and public schools statewide.

The ceremony I will lead shortly will re-dedicate this building with corn, wine, and oil. We use these items symbolically. The corn is poured as an emblem of nourishments, the wine, as an emblem of refreshment and the oil as an emblem of joy and happiness. They show us that our prosperity as a society is as dependent on the success of this structure as it is on the happiness, pleasure and peace these items give us regularly.

Many past and present legislators and executives have been and are Freemasons today. It is partly through their efforts that our cities and towns have found prosperity over the years.

The pomp and circumstance you see here today represents not only the significant contributions of those who came before us, but the wish for continued prosperity under the guidance and wisdom of today’s executive leadership.

Some day in the distant future, when this time capsule is rediscovered by our successors, I hope they can recall the events of today under similar happy circumstances. Thank you very much for being here today.

There were 32 districts in Massachusetts in 2015 (numbered 1 through 31), as well as districts for China, Cuba and Panama (which includes the lodges situated in Chile).