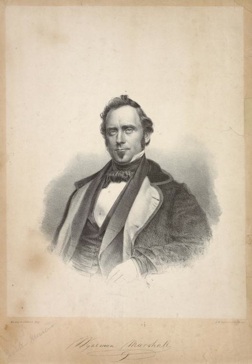 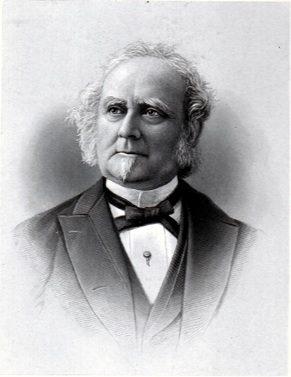 By request of the writer, R.W. Charles T. Gallagher read the following Memorial, which by a rising vote was accepted and ordered to be spread upon the records:

"What may we take into the vast Forever?
That marble door
Admits no fruit of all our long endeavor,
No fame-wreathed crown we wore,
No garnered love."

Our beloved Brother, Wyzeman Marshall, obedient to this voice, left all of earth, its favors, fortune, fame and friends, on the 25th of December, 1896, and passed on to the new possessions and lessons of another sphere. We have only to cherish and remember what he was as he lived among us men.

"His long life of 80 years and 3 months was laborious, honorable, energetic. The first twenty years, from Sept. 26, 1816, were chiefly occupied in securing a common school education, and in testing the shifting industries of youthful experiment preliminary to the settlement of his life course. Then, in 1836, his tastes met their natural aptitude in the studies and sacrifices incident to the career of a dramatic artist. In February of that year he made his first public appearance, in this city, on the boards of the Lion Theatre, as Bibulanus' in Knowles' tragedy of 'Virginius.'

"It would be a work of supererogation - to attempt to follow the career of Brother Marshall as by patience, diligence and study he climbed the rugged ascent of the dramatic mountain, to its brilliant ending on June 13, 1864, by a year's managerial direction of the old Boston Theatre. In the wide contrasts of these thirty years, and their intervening experiences, we may estimate the diligence, see the sufferings, and measure the manly greatness of our late Brother. At the one extremity we see him begin in an altogether subordinate capacity, with the minimum of responsibility and study and personal toil, and at the other burdened with a load of cares requiring not only the equable control of self, but the exercise of taste, judgment, discipline, literary skill and knowledge of popular wants.

"Note now the features of this managerial year and mark the greatness and variety of its cares, and the high dominance to which he was lifted in mind. He opened the season with Shakespeare's drama of 'Henry IV', Hackett being the Falstaff and himself the Harry Hotspur. Among the other attractions during the season were the great Spanish danseuse Isabella Cubos, Edwin Booth, Mrs. Mowatt, Edwin Forrest in 'Coriolanus', Maggie Mitchell, the beautiful Vestvali, with two seasons of Maretzek's Italian Opera.

"During the period of these theatrical labors there was a continual succession of new audiences, until they comprised nearly every city and principal town in the New England and Middle States; the familiarization of new characters, including in his repertoire such characters as Pizarro, Damon, Ingomar, Virginius, and Macbeth, with a great number of inferior rank; and an intimate association with the best and most famous actors and actresses of his time, Mitchell, Mowatt, Crampton, Thorne, Proctor, Forrest, Booth and Smith; so that none but legitimate dramas were included in his schemes, and the most refined and reputable artists secured his favors. For years he filled with great eclat several parts as a theatrical star.

"With this splendor of successes, Brother Marshall left his theatrical triumphs and devoted himself to giving lessons in elocution (for which he was eminently adapted by nature as well as by experience); fitting pupils for the stage; and in giving dramatic readings and recitals before lyceums and private assemblies in New England, where his reputation became a household word of affection. He also often cheered and enlivened the private meetings of his Masonic Brethren with his various recitals of both tragic and comic selections. One Masonic service deserves grateful mention here. During the Grand Mastership of Grand Master Lawrence, the disagreeable necessity of "commutation" became an imperious duty, and during the three years of his service, perambulatory visits were made to most of the Lodges of the State in that behalf. In each of these visits Brother Marshall was a participant, and after the solemn duty of "commuting" had been set home with irresistible conviction by the Grand Master, and supplemented by other facts showing the feasibility and happiness of his plan, Brother Marshall was invoked to give the glow of good cheer, and even, at times, of hilarity, before the Brethren separated for the night. The pleasure followed the pain, joyful impressions the strivings of duty, and the era of good-will was prolonged in the Fraternity. It was a service not to be measured by any ordinary estimates, for it was a work of life and love lavishly bestowed for the good of Masonry.

"Although Brother Marshall was closely wedded to his chosen profession he was not unmindful of the many questions which interested his community. Upon all municipal and public matters he had well formed opinions. In politics he was a Democrat, and at the earnest solicitation of his political brethren he, in the later years of his life, dabbled somewhat in the slimy pool. Twice he was nominated for Alderman, but failed of an election, at one time lacking but four votes to secure his seat at the Board. At this time he received the unanimous vote of his Ward, a most unusual and distinguished honor. He retained his familiarity with the classics till the very last of life, as was shown on many memorable occasions, one of which occurred a few days before his decease. His physician was descanting upon his great interest in the study of the human body, and how he had been struck by the complexity of its wonderful mechanical adjustment, when one of the nurses standing by asked Brother Marshall if he remembered the quotation from Hamlet, 'What a piece of work is man?' He immediately took up the passage, and with his old-time fire exclaimed, 'How noble in reason, how infinite in faculties, in form and moving how express and admirable, in action, how like an angel, in apprehension how like- a god, the beauty of the world, the paragon of animals,' and with the effort sank back exhausted.

"Brother Marshall was born in Hudson, N.H., of poor but respectable parents. He died in Boston, highly reputable in station, and well to do in this world's goods. Affecting funeral ceremonies were rendered by Boston Commandery of Knight Templars; the floral offerings were profuse and elegant; his last resting-place was the beautiful cemetery of Forest Hills.

"He left as deepest mourners his widow, Mrs. Elmina Marshall (born Lawrence), to whom he was married, in Boston, May 16, 1838, and an only son, Mr. Charles W. Marshall; three daughters, Elmina F., Helen F., and Daisy, having previously deceased. His loss will be severely felt by the Masonic Fraternity at large, and by his many friends wherever they may be. To those of us represented by this presence he sustains other and more fraternal relations. For more than forty three years he has been an active and infhiential member of the Masonic Fraternity, performing with affection the duties of private member, officer, presiding chief, installing officer, general adviser, giving all the brilliancy, of his splendid talents to the instruction and illumination of those who would be adepts in the lessons it conveys.

"He was raised to the sublime degree of Master Mason in St. John's Lodge, Boston, on Oct. .14, 1853, and served the Lodge as its Worshipful Master in the years 1858, 1859 and 1860. He was elected Honorary Member March 3, 1866. The Capitular degrees were received from St. Paul's Chapter of Royal Arch Masons on the 24th January, 1854, and he served as its High Priest for the years 1858 and 1859. The Cryptic degrees he received in Boston Council of Royal and Select Masters. He was dubbed a Knight in Boston Commandery of Knight Templars on March 3, 1854, and served as its Eminent Commander with very marked distinction for the two years of 1864 and 1865. His official eloquence and courtesy answered to the call of his Brother Knights to act as their Installing Officer for many consecutive years. He was elected Junior Grand Warden of the Grand Lodge in 1865, Deputy Grand High Priest of the Grand Chapter in 1859, and Grand Generalissimo of the Grand Encampment of Massachusetts and Rhode Island in the years 1874 and 1875. The Scottish Rite degrees to the Thirty-second inclusive were conferred by Raymond Council, and he was elected illustrious Grand Commander-in-Chief of the Grand Consistory till the time of the Union. He was made a Thirty third degree Mason on Jan. 6, 1863.

"With this survey of the 'hard strife and glowing hazard' of Brother Marshall's earthly course, we leave him at the borders of immortality. But what is immortality?

" 'Tis but Life,
In stronger thread of brighter color spun,
And spun Forever."

FROM COUNCIL OF DELIBERATION, 1897

From Proceedings of the Massachusetts Council of Deliberation AASR NMJ 1897, Page 59:

Wyzeman Marshall died Dec. 25, 1890. He was born in Hudson, N. H., Sept. 20, 1816. He attended the schools of his native town until his father removed to Charlestown, Mass, in 1823; there his education was continued in part at the public schools and in part under private teachers. When not at school he assisted his father on the farm and served at various times as shop boy and clerk. In February, 1836, occurred the incident which proved the turning point in his career. He was invited to take a silent part in a play at the Tremont Theatre in Boston, and his aptness and line appearance led to an invitation from Mr. Barrymore, the stage manager of the Lion Theatre, to join his company. The invitation was accepted and young Marshall made his appearance as Vibulanus in Sheridan Knowles’ tragedy of Virginius. Soon after Edwin Forrest came to the Tremont, and a conspicuous part in the plays acted by him was assigned to Marshall, and these engagements gave direction to the whole current of his life. His professional career from this time was similar to that of other actors. He played engagements in various parts of the country in support of the noted tragedians of the day, studying his profession diligently, and constantly looking forward to promotion. lie made steady advancement in his art, and his ability as an actor was widely recognized. He also successfully engaged in the business of theatrical management. He established vaudeville in the hall over the old Boylston Market in Boston, and at various times was manager of the Eagle and Boston Theatres and the Howard Atheneum. During the latter years of his life he devoted his time to the teaching of elocution.

Bro. Marshall was quick to detect genius, and generous to recognize the presence of dramatic ability in the young with whom he was associated, and no one was more ready to give timely assistance and encouragement to beginners.

In 1838 he married Elmira Lawrence of Boston, by whom he had four children. The widow and one son survive him.

Ill. Bro. Marshall was a man of irreproachable character, and was much respected in every walk of life. By his talent and industry ho achieved a handsome competence, and lie enjoyed a serene and happy old age. He preserved his interest in Masonry to the last, and was always ready to lend a helping hand in every Masonic service. Few men in the Masonic Institution had done more active work in its behalf, or had put more heart into its performance. His loss will be mourned by the brethren throughout the jurisdiction.