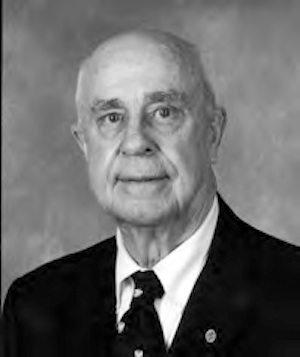 When M. W. J. Philip Berquist introduced R. W. William Caleb Loring in December 1981 as his second Deputy Grand Master, he described him as “a Mason whose service to our Craft has been exemplary, a man who carries with him a tradition of service to his country and fellow man from a family noted for benevolence and leadership throughout our country’s history.” He served admirably in that position

This characterization was appropriate and accurate. Brother Loring was born on June 30, 1925 in Beverly, Mass., and attended the Dexter School and Groton School, where he was a great student and star athlete. In 1943, he was drafted and served in the Coast Guard in World War II; a member of the Naval Reserve, he was called again to active service during the Korean War.

After his second honorable discharge, Brother Loring worked as a private trustee for State Street Bank and the law firm of Choate, Hall and Stewart. His Masonic associations were primarily in Boston; in 1954 he was raised a Master Mason in the Lodge of St. Andrew, where he took membership and served as Worshipful Master from 1962 to 1964 and again in 1973. In 1975 and 1976, by appointment of M. W. Stanley F. Maxwell, he served as District Deputy Grand Master for the Boston 1st Masonic District.

Brother Loring was a member of all of the Scottish Rite bodies of the Valley of Boston, as well as St. Paul’s Royal Arch Chapter, St. Bernard’s Commandery #12, and Aleppo Temple, A. A. O. N. M. S. In 2002 he received the 33°, the highest accolade of Scottish Rite Freemasonry.

R. W. William Caleb Loring entered the celestial Lodge above on February 10, 2011, after a long illness. It was said that he was never happier than when sailing with his wife along the coast of Maine, even in the sunset of his life. He is fondly remembered by the many people whose lives he touched.

When I was presented a lambskin or white leather apron I was informed by the Master of my Lodge that this was the greatest honor that could be conferred on me by king, prince, potentate, or any other man except he be a Mason.

This afternoon I have been accorded an honor of being admitted to a group of the finest Masons who have held this important office of Deputy Grand Master. To say that I'm most pleased and honored to merit such an honor is to put it mildly. In actuality, I am overwhelmed and after that introduction words fail me.

I have been asking myself the same question doubtlessly many Deputy Grand Masters have asked themselves repeatedly before installation, "am I worthy and qualified to hold such an important office". Time alone will tell.

The important consolation to this question of the feeling of inadequacy is the personal friendship and support I have received in all the offices I have held by all of the Past Grand Masters and the PresidingGrand Master.

I have the good fortune of belonging to two of the finest Lodges in the Commonwealth, the Manchester Lodge and the Lodge of Saint Andrew. My mother Lodge, the Lodge of Saint Andrew, has a motto that has guided me through many Masonic occasions in the past and will continue in the future. It is Audae, vidae, takae. Translated from the Latin it means "To see, to hear and be silent." With these words to guide me, how can I fail.

Most Worshipful Sir, your guiding us will not fail. Thank you.