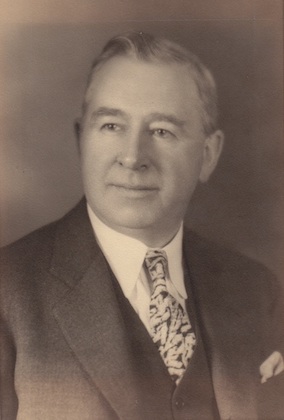 Our Brother Ralph Lowe, Jr. was born on August 6, 1885, in Boston, Massachusetts the son of Ralph and M. Gertrude (Cassidy) Lowe. He was educated in the Boston Public Schools and at fourteen years of age commenced work with the S.A. Woods Machine Company. He rose to Vice President and a director during his sixty years of association with the corporation. From 1925 through 1962 Brother Lowe served as Corporator, Trustee and Vice President of the Dorchester Savings Bank. He was also associated with the Equitable Life Assurance Society as an underwriter, assistant manager and manager from 1933 through 1962.

Brother Lowe was entered in Rabboni Lodge on October 18, 1906, passed on November 15, 1906 and raised on January 17, 1907. He served as Worshipful Master in 1924 and 1925 and was District Deputy Grand Master of the Dorchester Fourth Masonic District in 1927 and 1928. He was also a Charter Member of Milton Lodge. In 1934, Brother Lowe received the Henry Price Medal and in 1936 was appointed Grand Representative from the Grand Lodge of Quebec near the Grand Lodge of Massachusetts. In 1937 he was appointed Deputy Grand Master and twenty years from that date in 1957, he received his Veteran's Medal. In January of this year he celebrated his seventieth anniversary as a Mason. His long service on the Education Committee of our Grand Lodge will be well-remembered.

In capitular Masonry he was exalted in Dorchester Chapter of Royal Arch Masons on December 23, 1907 and served as its High Priest in 1926. He was appointed Grand Steward, subsequently Grand Scribe and in the years 1934, 1935 and 1936, served as Most Excellent Grand High Priest of the Grand Royal Arch Chapter of Massachusetts. He held minor offices in Boston Council, Royal and Select Masters in which he was greeted on May 31, 1917. He was knighted in Boston Commandery No. 2 on June 18, 1919. Brother Lowe was a life member of these as well as of the Scottish Rite Bodies in the Valley of Boston, which he joined in February of 1943. In Mt. Olivet Chapter of Rose Croix he served as a Guard for many years. He also was a life member of Aleppo Temple, A.A.O.N.M.S. He enjoyed long-time membership in Brae Burn Country Club of Newton.

Brother Lowe is survived by his widow, Hazel ( Moody) Lowe, a daughter, Mrs. Phyllis Davis of Vermont and two sisters, Lillian of Florida and Mrs. Sara Goldie of Vermont.

Right Worshipful Ralph Lowe, Jr. is quoted as having said of his ancestors, 'nothing special, just plain folks and good steady contributors to our Country and society for some time in past generations.' He entered the Celestial Lodge Above on October 18, 1977, from West Roxbury, Massachusetts and his epitaph could well read as a paraphrase of that which he said of his forbears. Right Worshipful Ralph Lowe, Jr. was a man who rose to great heights in the business world, in his community, and in Freemasonry. He was something 'special, but just plain folk and a good steady contributor to our Country, society and Masonry for some time.'

The appointee to that office {Deputy Grand Master} for 1937 has already demonstrated his Masonic ability, enthusiasm, and interest in the welfare of the Craft, to such an extent that his satisfactory fulfillment of the duties of the office of Deputy Grand Master for the coming year is a foregone conclusion. A native of Boston, he was raised in Rabboni Lodge in 1907, became its Worshipful Master in 1924, District Deputy Grand Master for the Dorchester Fourth District in 1927, became actively connected with the educational department of the Grand Lodge in 1929, where he held various offices until he was appointed Director of Education in 1931. To his efforts in that office, more than to any other one man, I believe we are indebted for the establishment ot the Lodges of Instruction upon a solid foundation.Although he asked to be relieved of the duties of Director of Education in 1934, upon assuming the office of Grand High Priest of the Grand Royal Arch Chapter, he has continued his active interest as Associate Director, and has left behind him a splendid record of achievement as Grand High Priest.Without attempting to enumerate his many other Masonic connections and activities, it is my pleasure to present the Deputy Grand Master of Masons in Massachusetts for the year 1937, a Brother who exemplifies the highest Masonic principles in his daily life, Bro. Ralph Lowe, Jr. (Applause)

I just want to say “I am that I am,” regardless of what is said that I am. It is naturally very embarrassing to rise with such a flattering introduction, but it is what you would expect from such a courteous and gracious leader as we have today at the head of our Fraternity in Massachusetts.

I was hoping about two or three weeks ago that I could lay down the duties of office and take a place in the Fraternity where I really think I can do my best work by being one of the rank and file, and trying to do in a quiet way what little I might be called upon to do.

When the Grand Master’s office tried to reach me at my office and my home on a comparatively recent date I had no idea of what he wanted to discuss with me. Naturally I was somewhat perplexed, but a story came to me of an incident that I think it is well for a man to recall when he has to make decisions, especially in days and times like these we are now passing through.

This story is built around a great New England man, Henry Ward Beecher, one of the greatest preachers of his day, who spent a great deal of his life here in New England. For a great many years the Doctor had a habit of going out and walking in the morning. On one of these morning strolls he noticed ahead of him by the side of the road a man grooming a very fine horse. As he approached the man he observed that he was one of his parishioners, and as they met they exchanged the salutations of the day. Then the Doctor could not refrain from saying to his parishioner, “That is a fine-looking horse.” The man said, “Yes, he is.” The Doctor said, “I hope he is as good as he looks,” and the answer came back, “Yes, Doctor, he is as good as he looks and the best of it is that he will do anything I want him to do, at any time, in any place.” The Doctor responded with this remark, “I only wish more of my parishioners were like that horse.”

Naturally my reply to the Grand Master could only be that I am ready to do what I can at any time or in any place. I am very grateful for this honor, because it is an honor. I am thankful for what the Brethren have done for me during my Masonic activity, because as I look in retrospect upon the last thirty years of my connection with this Fraternity, I can stand before you all and very definitely say, with all the sincerity that can come from the inner man, that I have never been connected with an organization where men approached in the right way and with the proper spirit responded more magnanimously.In accepting this office I feel this way about Masonry and I am going to tell you just how I look upon its opportunities and responsibilities. It seems to me that we have had four critical or epochal periods in Freemasonry in Massachusetts:

Deputy Grand Masters are to be seen and not heard. From our records it has been the custom, in only recent years, for the Grand Master to ask him to rise and say a word. I am happy to do that. It is a pleasure to be officially associated with and to serve our leader, Most Worshipful Claude L. Allen. His affabil­ity, modesty, and sincerity are stimulating and worthy of one’s best efforts to emulate.

Brethren, I do want to wish you all a Happy and Prosperous New Year with a sincere hope that in our contacts with each other during the ensuing year I can measure up to your expectations and contribute something to the great work in which we are engaged. (Applause)