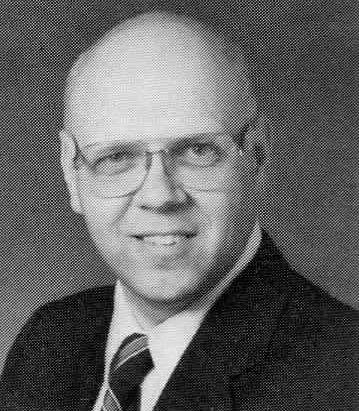 It is usually the busy fellow who is asked to accept another task to be done. Somebody like Right Worshipful Meldon E. Niemi. Our Deputy Grand Master has been energetically serving the Craft from the time he was raised in Charles A. Welch Lodge of Maynard in 1965.

A native of Concord, Brother Niemi is the son of 50-year veteran and Brother Toivo E. and Ilmy (Peltonen) Niemi. "Mel" was installed Master of his Lodge in 1970, only five years following his raising. A life member of his Lodge, he has been Chaplain, chairman of the Trustees, the Lodge Players and now is the busy Secretary. He was Master of the 38th Lodge of Instruction, 1979-80, and is past Secretary and Chaplain. He is currently instructing Fourth Class candidates.

Once active in the Maynard Masonic Corporation, he is a past President of the Marlboro 24th Masonic District Past Masters Association and is a member of the Massachusetts Masonic Secretaries' Association.

A 32nd degree Mason, Valley of Boston, he was awarded the S.R.A.P. Medallion. As a Shriner he is associated with the Past Masters Association of Aleppo Temple. In York Rite Masonry our Deputy Grand Master holds membership with Walden Royal Arch Chapter and the Adoniram Council of Royal and Select Master Masons.

Accepted into the Saint John's Evangelical Lutheran Church of Sudbury in 1939, he has faithfully served his parish in its Church School, as a Trustee of Committee on Finance and in the Church Choir and was a Deacon for many years. He is a Lay Reader, Lecturer and Lay Preacher.

The effect of Masonry in the community has been felt from his association with the Maynard Town Band. He has been property manager, secretary, librarian, treasurer and president. He is a trombonist in his town band and also the Townsend Military Band and the Ayer Firemen's Band.

Educated in the Maynard public schools, our Deputy Grand Master was graduated from its high school with honors. He received graduate honors in Architectural Engineering Technology from Wentworth Institute of Boston. Brother Niemi is a standards engineer for GenRad (formerly General Radio Corporation) of Concord. Employment began there in 1960.

Meldon E. Niemi and Joan M. Clausen were joined in marriage in 1970 in the Saint John Evangelical Lutheran Church in Sudbury. They have been blessed with sons Wayne Emil, age ten and Neil Edward, age eight.

What does the future hold for our busy Deputy Grand Master when he steps down from his office in December? "To serve in whatever capacity I may be asked. There is much to be done in life and, unfortunately, too few accepting the call to duty. I simply ask God for continued good health and strength so I can continue to be a useful member of society.

Meldon E. Niemi, 75, of Brooks St., Maynard, died Thursday, January 22, 2015 at Massachusetts General Hospital. He was born in Concord, son of the late Toivo and Ilmy Mary (Peltonen) Niemi. He was the husband of Joan (Clausen) Niemi.

A lifelong Maynard resident, he had been employed for many of his working years at GenRad in Bolton and West Concord as a standards engineer. He was graduate of Maynard High School class of 1957 and earned an engineering degree from Wentworth in Boston in 1963. He and Joan were married in St. John Lutheran Church in 1970.

In his spare time he enjoyed camping, music, his membership at St. John Evangelical Lutheran Church and his many years of serving in several Masonic organizations. He was a trombone player who had played the Maynard Community Band and the Townsend Military Band. His beloved canine companion Kalibean passed away in October.

In addition to his wife, he leaves two sons: Wayne and his companion Gail Sawyer of Acton, and Neil Niemi of Maynard and a grandson Daniel Niemi of Revere.

Meldon E. Niemi spent many years working hard for the Masonic Fraternity in Massachusetts. Raised in 1965 in Charles A. Welch Lodge of Maynard, he was installed as Master in 1970 and served for the following year. His term was memorable, in that included a “Finn Night”, bringing together a degree team composed of Finnish brethren from across the state; at the conclusion of which every non-Finnish brother was made, through a brief ceremony and the presentation of a certificate, an "Honorary Suomalainen”. It is fair to say that Brother Niemi was proud of his heritage.

Brother Mel Niemi was the son of a Mason, Bro. Toivi Niemi, who joined Charles W. Moore Lodge of Fitchburg in 1950 and served as Master in 1959. The elder Brother Niemi lived long enough to see his son installed as Master.

Active in his lodge and his district from early in his Masonic career, Brother Niemi was appointed by M. W. Arthur H. Melanson to serve as District Deputy Grand Master in 1978 and 1979, and in 1983 he was appointed by M. W. J. Philip Berquist as Deputy Grand Master. After his term he remained active at Grand Lodge and was a frequent participant in the committees and communications of the Grand Lodge.

Brother Niemi was active with York Rite bodies, the Aleppo Shrine and in the Valley of Boston.

He was associated with numerous civic associations in his home town of Maynard, including the Maynard Town Band and other musical groups, in which was a skilled trombonist. He was an active member of St. John’s Evangelical Lutheran Church, as a trustee, a deacon, a lay reader, lecturer and lay preacher.

R. W. Brother Niemi passed to the Celestial Lodge on January 22, 2015, and will be missed by his many friends and Brothers.

Meldon Emil Niemi was born in 1939 in Concord, the son of Fifty Year Veteran Toivo E. and limy Peltonen Niemi. He was educated in the Maynard Public Schools, and graduated with honors from Wentworth Institute with a degree in Architectural Engineering. He is presently employed by General Radio Company (GenRad) of Concord as a Standards Engineer. He is married to the former Joan M. Clausen and they are the parents of two sons, neither of whom are Masons, ten and eight years old.

He is very active in and is an Officer of Saint John’s Evangelical Lutheran Church in Maynard. A trombonist in several local musical organizations, he is also active in Town affairs and community activities.

Raised in Charles A. Welch Lodge, his service to Freemasonry has been exemplary, serving as Worshipful Master, Chaplain, Secretary and Trustee. He is a Past Master of the 38th Lodge of Instruction, Past District Deputy Grand Master of the Marlboro 24th Masonic District, Member of the Scottish Rite, Royal Arch Chapter and Council of Royal and Select Masters, a Noble of Aleppo Temple, A.A.O.N.M.S., active in many additional organizations of Masonic import, he is dedicated, warm, friendly, and a credit to our Craft. I give you Right Worshipful Meldon Emil Niemi.

Most Worshipful Grand Master and Distinguished Guests, and my Brethren AII:

A former colleague of mine and a past very active member of this Most Wor­shipful Grand Lodge, Right Worshipful P.K. Mcllroy, used to say on similar occasions when he had received such a beautiful introduction that he was whelmed. He didn’t say it was over or underwhelmed, but he was just whelmed.

Now, I looked up the definition of this word and it means to be overcome with thought and feeling. Truly elated. And I must say that I am indeed most truly overcome with thought and feeling and elation.There is only one other occasion that I can remember being so moved, and that was on the occasion that my present wife agreed to be my wife. But I must say on that occasion that I didn’t experience catoplexia, which I did when I received the call and the request to consider this appointment from our Most Worshipful Grand Master.

Now, even he has said before on similar occasions that the Grand Master may not always be correct, but he is never wrong. 1 am most grateful that the Supreme Architect of the Universe has endowed our Grand Masters with this omniscience. It is truly an asset, I hope.

Most Worshipful, in behalf of all your appointed officers, I must say that we will dedicate ourselves to the service of our fellow creatures and this Grand Lodge and to your leadership, for this next year in particular will be of a great challenge to all of us. We must always remember that there is no task that the will of God imposes upon us that the grace of God will not see us through. We hear so much conversation discussing the decline in membership, but, Brethren, I must say that this is no time to burn the candles and sit shiva. This is a time to learn from the operative class, I suggest. It’s a time that we must have imagination.

As it was said, I do have a degree in architecture and I suggest that we might digress to the Greek forms of architecture. We see public buildings now with a decorated tympanum and an entomblature about the columns. But now we make the mistake of not decorating them. The Greeks, to whom we give so much credit, decorated their relief on their buildings. They had bright colors. Now, I’m not saying that we should be garish and go about in bright colors and make a general mockery of our Craft. But I say that we should have the imagination that will give color to the meaning behind our Craft.

We have our ritual that states, Craftsmen, you know the law. And we must adhere to these laws because in this day and age we have so many people suggesting that, well, you’re not with it, you’re not going by the new standards.

Masonry, I suggest, my Brethren, is a combination of both the moral law and the natural law. Both are immutable. But within the confines of this combination of law we see that imagination allows us to live and act and thrive within these confines.

For imagination is the progenitor of innovation and innovation within the scope of our Grand Constitutions will be the key to our future success in Freemasonry. Definitely not the cop-out of Masonic secrecy. We need public emphasis of these important values and principles of Freemasonry. Hiding behind the secrets of our Fraternity no more makes a man a Mason that just owning a piano makes one a musician.

Masonry is dedicated to anonymous charity and service, not self-serving and self-seeking gratuities. We must pay attention to the most important facets which make up the diamonds of Masonic moral qualities. We must do so to insure the future of our Craft will be as glorious as our past.I suggest, Brethren, that in our 250th year that we look back and give thanks, look forward and take courage, look around and serve, look up and ask for God’s help. Thank you.