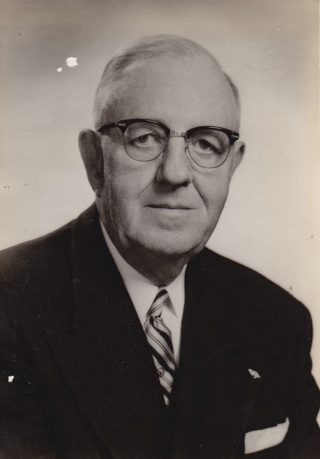 R.W. Harry B. Tabor was raised to the Celestial Lodge above at Amherst, Massachusetts, on Sunday, August 22, 1965. He was the Junior Grand Warden of the Grand Lodge of Massachusetts in 1957.

He was born at St. Martins, New Brunswick, on June 3, 1889, the son of Joseph Burpee and Mary Elizabeth (Howard) Tabor. His genealogical record traces back to Philip Tabor, born in 1605, who came from Essex, England, to Plymouth, Massachusetts, in 1630, thus qualifying him for membership in the Mayflower Society.

Brother Tabor received his basic education in the public schools of Bath, Maine, where he graduated from High School in 1908. He attended Suffolk Law School for one year and one semester, but was unable to continue because of the pressures of his employment as an executive of Whiting Milk Companies. His executive assignments included Office Manager, Credit Manager and Assistant General Manager through 1931. He then formed an association of Milk Dealers, serving as Secretary for four years and thereafter having been the owner and operator of the Eastern Dairy Supply Company, catering to the needs o{ milk distributors for supplies necessary to the dairy industry.

As a man whose religious persuasion was Baptist, he served as a member of the Standing Committee of the First Baptist Church of Everett, Massachusetts, where he also taught a Young Men's Sunday School Class.

Brother Tabor was made a Mason in Palestine Lodge, being raised to the Sublime Degree of Master Mason on April 14, 1921. He served as a Director of Palestine Masonic Association of Everett for over twenty years.

In 1941 Most W'orshipful Brother Albert A. Schaefer appointed him District Deputy Grand Master for the Malden Seventh Masonic District.

In the York Rite he was exalted in Bethesda Chapter May 1, 1925 and was its High Priest in 1935. He was greeted in Melrose Council Royal and Select Masters February 15, 1928 where he served one year as Steward; and was Knighted in Beauseant Commandery No. 41 on October 23, 1944.

He received the degrees of the Scottish Rite in Boston Lafayette Lodge of Perfection, Giles F. Yates Council Princes of Jerusalem, Mount Olivet Chapter of Rose Croix, and Massachusetts Consistory, all in the Valley of Boston.

He was elected Junior Grand Warden of the Grand Lodge of Massachusetts for the year 1957.

R.W. Brother Tabor gave outstanding devotion and service to the Order of DeMolay. He was a past District Governor of the Northern Area o{ Massachusetts and was very active in the International Supreme Council.

He is survived by his widow, Bessie, and two daughters, living in Ocean Park, Maine, where Brother Tabor had been a Director of the Ocean Park Association.

The Masonic Fraternity has lost a member who commanded such esteem and respect that all who knew him will deeply feel the void created by his loss. But let us not be bowed by sadness; rather, let us rejoice in the happy memories of the years he spent with us.