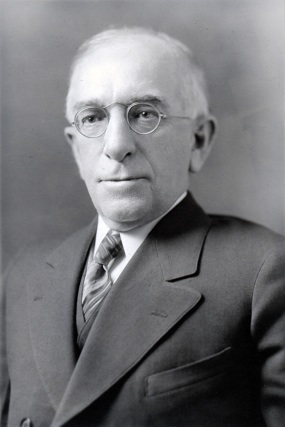 Brother Jackson was born in Salem, Massachusetts, on September 7, 1871, and died at his home in Danvers on September 10, 1945. After graduation from the Danvers High School, he entered the Boston University Law School, and upon completion of his work there in 1894, entered the law office of John M. Raymond, Mayor of Salem. Later he entered a partnership with his brother, Oscar E. Jackson, and thus continued until his death.

He was raised in Amity Lodge of Danvers on June 18, 1897, and served as Master in 1909. He was appointed as District Deputy Grand Master for the 9th Masonic District in 1920 and 1921 by Most Worshipful Arthur D. Prince, Grand Master; was elected Junior Grand Warden of the Grand Lodge at the December, 1928, Communication; was appointed a member of the Board of Trial Commissioners in December, 1929, on which Board he continued until his death. In 1931 he received the Henry Price Medal from Most Worshipful Herbert W. Dean, Grand Master.

In the collateral bodies, he was a member of Holten Chapter, R.A.M., Salem Council, R.& S.M., Winslow Lewis Commandery, K.T., the Scottish Rite Bodies of Salem and Massachusetts Consistory, A.A.S.R., but never held office in any of these bodies.

He was active in civic affairs in Danvers for many years, holding several public offices. At the time of his death, he was Justice of the Ipswich District Court, a position he had filled for several years.

We shall miss our Brother for his ever buoyant, cheery nature; his willingness to serve in whatever field of endeavor he might be asked, his sincere love of his fellowman. In his passing, he leaves us these memories of him and of his many fine works.

Masonic funeral services are being held this afternoon at his late home in Danvers, conducted by the officers of Amity Lodge.

Right Worshipful Harry Eben Jackson was born in Salem, September 7, 1871, and died at his home in Danvers September 10,1945, after a short illness.

He was the son of Eben and Lupira S. Newbegin Jackson and was educated in the Salem and Danvers Public Schools and was a graduate of the Boston University Law School.

He was a practicing attorney in Essex County for almost fifty years, with offices in Salem and Danvers. He held membership in the American, Salem and Essex County Bar Associations, being Treasurer of the latter body at the time of his death. He was Town Solicitor of Danvers for a number of years; was Special Justice of the 3rd District Court at Ipswich, by appointment of Governor Samuel W. McCall; he was as the President and attorney for the Danvers Co-operative Bank, a Trustee, and Member of the Finance Committee of the Salem Five Cents Savings Bank; also a Director and attorney for the Salem Morris Plan Bank.

In Masonry, he was raised in Amity Lodge of Danvers in 1897 and was its Worshipful Master in 1909; was exalted in Holton Royal Arch Chapter of Danveis in 1906; was greeted in Salem Council, Royal and Select Masters, in 1908, and was knighted in Winslow Lewis Commandery of Salem in 1906. He was a member of all the Scottish Rite Bodies of Salem and received the thirty-second degree in Massachusetts Consistory of Boston.

He was District Deputy Grand Master for the Ninth Masonic District in 1919 and 1920, by appointment of Most Worshipful Leon M. Abbott and Most Worshipful Arthur D. Prince; was elected Junior Grand Warden of the Grand Lodge in 1929; was appointed a member of the Trial Commission by Most Worshipful Herbert W. Dean and served up to the time of his death.

Funeral services were held at his home and were conducted by the Rev. Paul McElroy of the Maple Street Congregational Church, followed by Masonic services by the officers of Amity Lodge. He is survived by his wife, Mrs. Fanny Friend Jackson, a brother, Attorney Oscar E. Jackson, and a sister, Mrs, Lester W. Couch, all of Danvers.

And so runs the record of a useful and successful life. He was efficient in every work he undertook, and in all matters of controversy, his voice always rang true. He was blessed with a genial disposition, with a quiet sense of humor; always courteous, kindly and considerate. His loss will be keenly felt.

"He was a man whose heart was good
Who walked with men, who understood.
His was a voice that spoke to cheer,
And fell like music on the ear.
His was a smile folks loved to see;
His was a hand that asked no fee
For friendliness or kindness done.
And now that he has journeyed on,
His is a name that never ends.
He leaves behind uncounted friends."