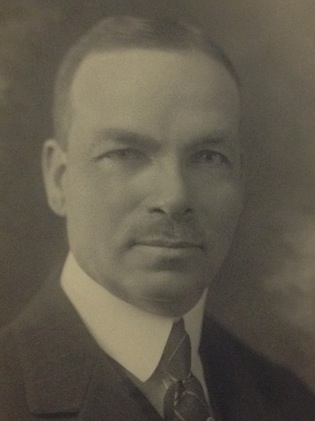 On Saturday, May 2, 1959, Freemasonry suffered the loss of one of its oldest and most distinguished members, Right Worshipful Horace A. Carter. Though always a busy man, he never failed to find time to devote his interest to our Craft. His personal character and manner of dealing with mankind as a whole was always proof of his integrity, and the purest exemplification of the virtues of Freemasonry. Throughout his life, he truly inculcated the moral principles by which all Masons are taught to rule and govern their lives.

Right Worshipful Horace A. Carter was born on January 6, 1869, and lived his entire life in the Town of Needham, Massachusetts. He graduated at an early age from the Needham Public Schools and supplemented his education by a course in "Comers Commercial College."

At the age of sixteen, following his own inclination, he started in his father's knitting mill at the very foot of the ladder. After a number of years of apprenticeship, he and his brother, the late William H. Carter, joined their father in a partnership that lasted until 1902. At that time the partnership was incorporated, and he became Treasurer and Clerk of the new Corporation. He was subsequently Treasurer of the Springfield Knitting Company, a division of the William Carter Company from 1909 to 1913, and during the same period was Treasurer of two other kindred interests.

In 1923, he became President of the Carter Collier Company in Barnesville, Georgia, which later merged with the William Carter Company.

He was Director of the Q. P. Signal Company of Needham Heights for fifteen years.

R.W. Brother Carter was also a director of the Webster and Atlas National Bank of Boston. In August of 1928, he was elected President of the Needham National Bank and later served as Chairman of the Board.

On December 23, 1891, Horace A. Carter was married to Bertha Louise Manson and they became the parents of four sons, Raymond Manson, Manson Hildreth, Horace Ronald and Lyndall Frederic. Raymond Manson died in infancy. Manson Hildreth passed away at Canton, Massachusetts, on September 9, 1923. He left Boston University to enlist as a private in World War I. He was soon made a Second Lieutenant and received his honorable discharge in 1919. While overseas with the armed forces he contracted a severe case of influenza which eventually caused his health to fail completely. Brother Carter's other two sons, Lyndall Frederic and Horace Ronald, survive him and are active in the William Carter Company.

In 1946 R.W. Brother Carter suffered the loss of his first wife and later married Emily Tilden, who survives him.

Throughout his li{e, Brother Carter took the keenest interest in those plans and projects which have been important factors in public and human progress. For twelve years, beginning in 1904, he served on the Needham School Board and for three of those years was Chairman. From 1920 to 1923 he was President of the Massachusetts State Chamber of Commerce and in this capacity showed great vision and foresight. At the annual meeting of that organization in 1922 he strongly urged consideration of the St. Lawrence River Canal and Power Project, which only now, after thirty-seven years, is becoming a reality.

Brother Carter demonstrated his political interests by serving as a member of the Governor's Council during the administrations of both Channing Cox and Calvin Coolidge. As a result of this association, he and the late President Coolidge were lifelong friends.

In his religious belief he was an ardent and lifelong Methodist, and served as Trustee o{ his Church for man}r years. He was fortunate enough to live to see the beautiful Methodist Church we have in Needham today dedicated as the Carter Memorial Church in honor of his family name. R.W. Brother Carter also served as a Trustee of the Deaconness Hospital for a number of years.

Pages and pages could be written about the accomplishments of this man. His interests in life, his generous contributions to all charities, regardless of race or creed, his activities in business and social life are fiat too numerous to mention accurately. But fundamentally, we know that one of the things that truthfully abided in his heart was a sincere devotion and love of Freemasonry. Horace Carter was a Mason for sixty-four years. In all that time he never failed to walk and act as such.

His Masonic career began early in life, at the age of twenty-six, and he took his degrees in the following Masonic Bodies: He received his Entered Apprentice Degree on October 14, 1895, was passed November 11, 1895, and raised to the Sublime Degree of Master Mason in Norfolk Lodge, Needham, December 9, 1895.

He received his Royal Arch Degree in Newton Royal Arch Chapter January 21, 1902; the Order of the Temple in Gethsemane Commandery, April 22, 1902. Later, he received his Super Excellent Degree in Cryptic Council in February, 1925. He was a member of all four Bodies of the Ancient Accepted Scottish Rite in the Valley of Boston and received his 32° in Massachusetts Consistory on October 26, 1917. R.W. Brother Carter was installed High Priest of Newton Royal Arch Chapter in 1909 and Worshipful Master of Norfolk Lodge in Needham in 1913, serving as Master for two years. He was District Deputy Grand Master of the Fifth Masonic District in 1916 and 1917 and Junior Grand Warden of the Grand Lodge in 1919, receiving the Henry Price Medal the same year.

He was made an Honorary Member of Norfolk Lodge on March 10,1919, and became a life member December 9, 1930. On October 14, 1945, he received his Veteran's Medal. Brother Carter was Trustee o{ Funds for Norfolk Lodge from 1920 until 1959. In 1914 he and other members of Norfolk Lodge joined together and formed an association in order to purchase an existing building and land where the present Masonic Temple in Needham is now situated. This association eventually became incorporated under the name of the Needham Masonic Corporation on April 23, 1916, and he served as a member of the Board of Directors in that Corporation until the time of his death.

In his late years, R. W. Brother Carter was forced to restrict his Masonic activities to attending his Mother Lodge and serving it in whatever way he could. However, he was fortunate enough to be permitted to live and serve in many capacities, both fraternal and civic for a total of ninety years.

From the beginning of his long life to its very end, everything that Horace Carter did was honorable and consistent. He was a gentleman in whom the virtues of Christianity and of Freemasonry were not only the rule and guide of his faith, but also the precepts of his very existence. With his passing all Masons witness visible proof that time yields to no man. However, we can all take comfort in the fact and belief that

"In Peace he rests, beyond our sight
In that bright world, that has no night."