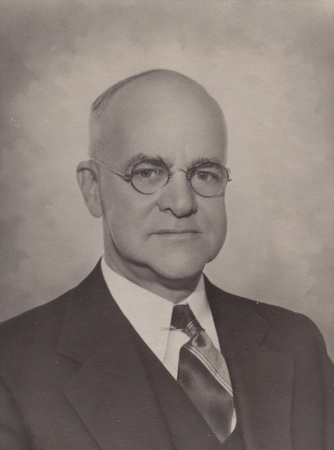 He was educated in the public schools of Holbrook, and since 1900, had been associated with the Walker-Stetson Company as a salesman. His sudden death occurred while in conversation with a customer in Middlebpro.

He was raised in Norfolk Union Lodge of Randolph on February 15, 1905, and served in the several stations in that Lodge until he became Master in 1916 and 1917.

He served as District Deputy Grand Master of the 26th Masonic District in 1926 and 1927, by appointment of Most Worshipful Frank L. Simpson, and was elected Senior Grand Warden of the Grand Lodge in December, 1938. He was a member of the Education Committee of the Grand Lodge at the time of his death, having served in that capacity for several years.

He was awarded the Distinguished Service Medal in 1931 by Most Worshipful Herbert W. Dean and the Henry Price Medal by Most Worshipful Joseph Earl Perry in 1939. No Brother was ever more worthy of these high honors. He had also been elected as an Honorary Member of Rural Lodge in 1931.

He was a member of Satucket Chapter, R.A.M., Brockton Council, R.& S. M., and Bay State Commandery No. 38, K.T., all of Brockton, and also a member of the Scottish Rite Bodies in Boston.

At the time of his death, he was a Director in the Holbrook Cooperative Bank and the Randolph Savings Bank. He is survived by his widow, one son and three grandchildren.

A life of worthy Masonic service has passed from our sight, but the memories of that life will ever be an inspiration to his Brethren.

Right Worshipful George Edwin White was born at Holbrook, Massachusetts, on October 13, 1881, the son of Walter E. and Caroline E. White. He was educated in the public schools of that town, spent his entire life there and died July 1, 1942.

After graduating from High School he became associated with the Walker Stetson Co. of Boston and remained with this firm until his death - a service of forty-two years.

His business was salesmanship but in the six decades of his life he sold far more than material things, for in his contacts with his fellowmen his quiet, kindly, upright nature was unconsciously selling all the more wholesome attributes that ennoble life. He was always modest and unassuming but ever loyal and willing; serving, not demanding; cheerful, friendly.

While he held no office in the York and Scottish Rites, he was Worshipful Master of Norfolk Union Lodge in 1916-17; District Deputy Grand Master for the Quincy 26th District in 1926-27; and Senior Grand Warden of the Grand Lodge in 1939. He was the first Master of the 22nd Lodge of Instruction and at the time of his death was serving as Zone 1 Committeeman of the Committee on Education.

Besides his interest in Freemasonry, he was a member of Winthrop Church in Holbrook; a Director of the Holbrook Co-operative Bank; a Trustee of the Randolph Savings Bank and served as President of the Masonic Realty Trust.

He is survived by his widow, one son and three grandchildren.

Brother White was a prominent citizen and an active and influential Mason and a host of Masonic Brethren pay grateful tribute to his upright Masonic character and his comradely life.

Masonic funeral services were conducted by Norfolk Union Lodge in Winthrop Church and were attended by a delegation of Grand Lodge Officers, headed by the Grand Master.