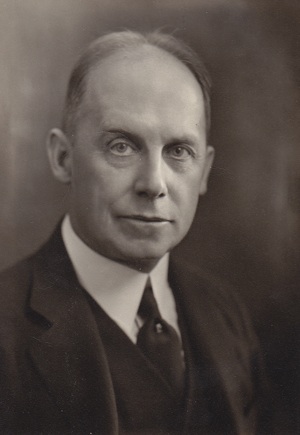 Rarely has a long life been so crowded with service to others as was that of R.W. Edwin Otis Childs, which began in Newton, Massachusetts, August 10, 1876, and ended its earthly chapter in the same city on May 17, 1950. In all his seventy-three years, 'Ned" Childs probably never once refused a call for service of any kind. The range of his civic, religious and fraternal services was extraordinary, but it was matched by the range and depth of his personal friendships. At his funeral, the great Eliot Church in Newton was filled to the doors by men and women of all walks of life, all feeling the loss of a sincere friend who was always kindly, cheerful and understanding.

Graduating from Harvard University in 1899, he studied law at Boston University, received his law degree in 1902, and practiced law for the ensuing half century

He served his city of Newton in many capacities and for long periods. Among these services were membership in the Board of Health from 1907 to 1913; Mayor from 1914 to 1930, and again from 1936 to 1940. He served the County of Middlesex as a County Commissioner from 1945 to 1948, and the Commonwealth of Massachusetts as a member of the Commission to Investigate Drunkenness. He was instrumental in starting the Boys Division of the Newton Y.M.C.A. in 1891 and was a Director of the Y.M.C.A. since 1901. He was President of the Nonantum Boys Club since 1907; leader of the Good Citizen Association for more than forty years; and a member of the Newton Rotary Club since its founding in 1923. He twice declined important judicial positions.

He was in continuous demand as a speaker of unusual eloquence and he gave of his time and strength without stint, as he did of his financial resources. His words and his acts were wholesome, generous, courageous.

His fraternal affiliations were many and varied, including the New England Order of Protection, the Elks (Past Exalted Ruler), Odd Fellows (Past Noble Grand), Royal Arcanum and Grange, and since 1924,he was Chairman of the Advisory Board of Newton Chapter of DeMolay, but his primary fraternal interest was in Masonry.

How fitting the words he used so frequently at the close of his eloquent addresses:

Most Worshipful Grand Master, distinguished guests, and my Brothers:

There are some people out in the city where I live who would like to be heard in rebuttal. I am very happy to be here. This noontime I sat at a table surrounded by Grand Chaplains, and tonight I am in the midst of statesmen. I don’t know why it is, but Masonry seems to fit a fellow so that he can feel at home with any group.

Leverett Saltonstall lives on a private way, and Joe Bartlett, my City Solicitor, says to keep off private ways. Obedience to constituted authority, however, is the paramount duty of every Mason, therefore, Most Worshipful, I shall give your order prayerful consideration.

I really ought to say that I appreciate the honor the Most Worshipful Grand Master has done me and my Lodge—and I think my Lodge quite as much as me. From the ranks we came and to the ranks we go. Fifty years ago, I think tonight, Right Worshipful Albert L. Harwood, a Newton Schoolmaster, and afterwards a student of the law and lawyer was installed Deputy Grand Master of the Grand Lodge of Massachusetts. For years he was Prelate of Gethsemane Commandery. I was his associate Prelate for a number of years. Then I succeeded him when he entered the larger life, and if I am half as good a Deputy Grand Master, or half as good a Prelate as he was, I will be happy.

We are living in troublous times. While everything seems to be wrong side out and upside down, I, too, think there is ground for optimism. I think we are in a position to improve because we know the cause of all our troubles, and we know the cure. Any good doctor will tell you that if you know those two things, and do what you ought to do, there is sunshine ahead.

Out in the ward in my city where Leverett Saltonstall and Illustrious Brother Spilman live, there used to be an old gentleman who in his early days was the pastor of the First Baptist Church in Newton, and who as a young fellow, wrote “America.” We sing it to the same tune our good Brethren from over the line—an imaginary line by the way—sing “God Save the King.” The next time you sing the last verse of that old hymn, pay particular attention to the first line, “Our fathers’ God to Thee, Author of Liberty.”

When God and religion go, or fade, or when the church fades, liberty and freedom and everything else that we enjoy go also. They kill them, God, religion, and church, in one way over in Russia. They kill them another way in Germany. Right now in the good old United States of America, we are killing them a third way, by desertion, an equally effective job.

The challenge to us today and to Masonry is to rally round the old standards; to appreciate the great heritage which is ours and which it is our duty to pass on to our successors, enriched and unimpaired. That means to get on the job right in the old home town and do the things we ought to do because they ought to be done.

This Feast is dedicated to St. John the Evangelist, and to a very dear friend of all of us, a Past Most Worshipful Grand Master of this Grand Lodge. I just want to say a word about him. I have followed his career since he was in Monitor Lodge in 1902. I installed the officers of his Lodge two weeks ago. They are still talking about him out there, just as they used to. It is a good record to have them talk about you like that after thirty-five years.

On a foggy night recently I went out to Charles A. Welch Lodge, in Maynard, and saw a DeMolay boy, Bill Walters—he is here tonight—installed as Master of his Lodge by Most Worshipful Brother Johnson. That was a very gracious thing for him to do.I want to say to you, Brother Johnson, I wish you unending joy and in your heart a wealth of sunlight, song and love as rich as that which you have unconsciously poured into the lives of hundreds of men and women and little children, who have known you and loved you.