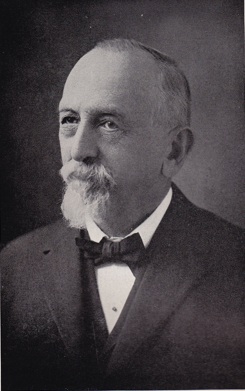 Brother Charles I. Litchfield who Was elected commander of the Grand Commandery, K. T. of Massachusetts and Rhode Island at the last annual meeting of that body is one of the best known masons of Plymouth County, Mass. In Plymouth, the town of his residence, he has always been looked upon as the strongest pillar of support in the two Masonic bodies located in that historic town. Brother Litchfield has always been active in Masonic work, his interest dates from his first connection with the order in 1870, at which time he received Masonic light and united with Plymouth Lodge. He served Plymouth Lodge as Worshipful Master eight years at various periods. He was made a Royal Arch Mason in Samoset R. A. Chapter of the same town and later served the body five years as its High Priest.

He has been District Deputy Grand Master of the 25th Masonic District, is a Past Senior Grand warden and a permanent member of the Grand Lodge of Massachusetts. He received the Templar degree in Old Colony Commandery K. T., Abington, Mass., but affiliated with Boston Commandery in 1883. He was eminent commander of the latter body in 1894 and 1895. He is affiliated with Boston Council, R. and S. Masters, and a member of the Scottish rite, including the 32d degree.

While Bro. Litchfield has always been interested in every branch of Freemasonry he is most widely known in connection with the Templar Rite, in which he has been long active. In the Grand Commandery he has advanced through various stations to the most important, to which he has now been elected. Brother Litchfield is a native of Boston where he was born about sixty-five years ago. His education was obtained in the public schools of Boston where he graduated from the English High School. He is a member of the Old School Boys Association.

In his younger days Brother Litchfield passed several years in wholesale mercantile business but in later life has devoted his attention principally to large real-estate interests. In Plymouth he has taken an interest in all matters affecting the welfare of the town and was a member of the school committee for a period of twelve years.

R. W. CHARLES I. LITCHFIELD, Past Senior Grand Warden, died at his home in Plymouth, Oct. 22, 1920. Bro. Litchfield in his quiet way was a tower of strength and his earnest and untiring labors in behalf of the Fraternity during his long Masonic life brought its reward in the deep love and high respect of his Brethren.

CHARLES IRA LITCHFIELD, son of Ira and Sally (Howland) Litchfield, was born in Boston, March 5, 1840. The father, Ira Litchfield, was born in Scituate, April 4, 1809; learned the carpenter's trade and married, April 14, 1839, Sally Howland, of Plymouth. They had two sons, Charles Ira, our deceased Brother, and Henry Howland Litchfield, born October 18, 1850, who still survives and for thirty-eight years has represented Plymouth Lodge in this Grand Lodge.

R. W. Charles I. Litchtreld attended the public schools of Boston. When he was a member of Phillips Grammar School he was in the parade of school children on Boston Common, October 25, 1848, when water was turned into the Frog Pond to celebrate the introduction of water into Boston. He graduated from the English High School in the class of 1857. On leaving school he entered the employ of Jewett, Tebbetts & Co., Milk Street, and, later, on the corner of Franklin and Hawley Streets, Boston. In 1860 he was employed by Morey and Dayton, Tremont Row, dealers in gloves, hosiery, and yarns. In 1861 Brother Litchfield bought Mr. Morey's interest in the business and the firm of Dayton and Litchfield was established, having a manufactory at Ipswich, Mass. In 1865 Brother Litchfield retired from the business, selling out to his partner, and in 1867, in the interest of his health, he moved to Plymouth, Mass., where he resided for fifty-four years.

November 23, 1864, Brother Litchfield married Miss Rebecca Bartlett Allen, of Plymouth, by whom he had five children, but one of whom, Clara Bartlett Litchfield survives him. Mrs. Rebecca (Allen) Litchfield died suddenly September 9, I9I4, and Bro. Charles I. Litchfield died in Plymouth on Friday, October 22, 1920. The impressive funeral services were held on Monday, October 25, many representatives from the various Masonic bodies of which he was a member being present.

R.W. Bro. Litchfield was a very quiet citizen, taking no active part in public affairs. He was not fond of sports or athletic garnes, but was devoted to the management of his own business concerns. IIe had one supreme interest which for more than fifty years called forth his cheerful activity. He was deeply interested in Freemasonry. The prosperity and harnony of the Institution were his delight. To these high aims he freely gave his thought and effort.

Bro. Litchfield received the Capitular degrees in Samoset R. A. Chapter, of Plymouth, in 1870 and 1871. He served the Chapter as its High Priest five years, in 1879, 1880, 1885, 1886, and 1887, and was the Senior Past High Priest at the time of his decease. He was a member of the Massachusetts Convention of Past High Priests. He became a member of Boston Council of Royal and Select Masters January 29, 1885. R. W. Bro. Litchfield received the orders of Knighthood in Old Colony Commandery, K.T., of Abington, in 1873. He dimitted and joined Boston Cornmandery, K.T., January 16, 1884. He was Eminent Commander of Boston Commandery; K.T., from October, 1893, to October, 1895, and was the Right Eminent Grand Commander of the Grand Commandery of Massachusetts and Rhode Island in 1907. He was elected to Honorary Membership in Old Colony Commandery, K.T., February 27, 1906, and in South Shore Commandery, K.T., June 14, 1909. For more than twenty years he was an Honorary Member of Detroit Commandery, K.T., No. 1, of Detroit, Mich. He was a member of the four Scottish Rite Bodies meeting in this Temple, becoming a member of Massachusetts Consistory, 32d degree, April 25, 1884.

For years he did not favor the organization known as the Order of the Eastern Star. During the past year he gave the history, constitution, and work of this body, serious thought and study. Discarding his former views; he applied for the degrees of the Order of the Eastern Star in Plymouth Chapter, No. 168. He was accepted June 1, 1920, as a member, the degrees being conferred by his sister-in-law, Mrs. Henry H. Litchfield, Worthy Matron.

Thus we sketch the career of a loyal, active Brother. He shunned no Masonic work but esteemed service as duty and pleasure. His work is not cast away. ft bears his stamp. Good work, square work, which will fill its proper place in the growing walls of the Masonic Institution. His career presents to us a humble, unpretentious, yet workful example of a true and honest Freemason.

"It seemeth such a little way to me,
Across to that strange country, The Beyond,
And yet not strange, for it has grown to be
The home of those of whom I am so fond;
They make it seem familiar and most dear,
As journeying friends bring distant countries near."