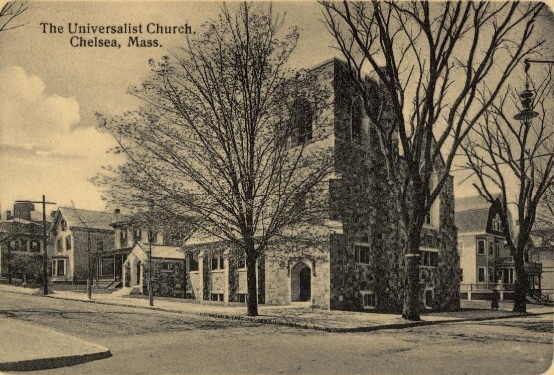 LAYING OF THE CORNER STONE OF A UNIVERSALIST CHURCH.

The Corner-Stone of a new Universalist Church, at Chelsea was laid by the Grand Lodge of this State, on Thursday, the 30th ult„ the M. W. Grand Master, Wm. D. Coolidge, officiating, assisted by the officers of the Grand Lodge. The ceremonies took place at 5 o'clock in the afternoon, and were of an interesting character. Addresses were made by the Grand Master and others. At the conclusion of the ceremonies the Grand Lodge, at the invitation of the Brethren at Chelsea, sat down to an elegant collation. The escort duty was well performed by Palestine Encampment of Knights Templars of Chelsea.

We had space in our last merely to mention the fact that the Corner-Stone of the new Universalist Church, to be erected on the corner of Chestnut and Fourth streets, Chelsea, was laid with Masonic ceremonies, on the 30th May. The occasion, was one of marked interest and worthy of a more extended notice than we were at the time able to bestow on it.

The Grand Lodge, by which the ceremonies were performed, assembled at the Masonic Hall, in Chelsea, at 5 o'clock in the afternoon, and were soon after waited upon and escorted through some of the principal streets of the city to the site of the proposed church, by (Chelsea) Palestine Encampment of Knights Templars, Dr. Chas. A. Davis, Commander, and large detachments from the Boston and De Molay Encampments,—the whole under the command of Sir Knight John K. Hall, of the Boston Encampment. About eighty Knights were in the ranks, and we have rarely witnessed a finer display of the chivalry of our Order.

On arriving at the site of the church, the Grand Lodge and escort took their places on the platform, and the ceremonies were began with prayer by the acting Chaplain, Rev. M. B. Newell, of Marshfield, Vt. An original hymn, written by a young lady of the Universalist Sunday School, was then song to the tune of " America."

The corner-stone was next laid in due form, according to the impressive Masonic rite. The box which was placed in the stone contained the following:—A history of the parish, names of members and officers, names of the building committee, architect and constructors of the new church, record of the General Convention of Universalists, catalogue of Tufts College for 1861, the Denominational Register for 1861, a set of denominational papers, an account of the Sunday School Anniversary held in Tremont Temple May 20, 1861, President Lincoln's Inaugural Address, Gov. Andrew's Address to the Massachusetts Legislature May 14, 1861, Chelsea paper containing an account of the great Union Meeting, a set of Boston daily papers, financial report of the city of Chelsea, Address of Mayor Fay, Chelsea school reports for a number of years, records of benevolent and charitable societies, copy of the Hymn Book of the Universalist Society, order of exercises of the laying of the cornerstone, also a few other papers of interest.

Grand Master William D. Coolidge addressed a few words of congratulation to Rev. Charles F. Leonard, pastor of the society. He said that as the Corn, the Wine, and the Oil, emblematic of health, plenty, and peace, had been poured upon the stone in due form, and the proper ceremonies of the Order had been observed, ho hoped that the gospel of peace might be preached within the walls of the new church.

To this Mr. Leonard responded, trusting that the ceremonies might make a due impression upon the minds and hearts of all present, and that they might cherish a remembrance of the solemn services of the day.

Rev. John S. Barry, of Boston, said we need not ask why these services had taken place. The answer is — Masonry is older than Christianity itself, or indeed it is Christianity. It is in the edifice which is to be raised on this spot that men will be taken, as the builder takes the rough stone from the quarry, to be wrought into a spiritual structure. If all could understand these beautiful emblems of consecration as those who have performed this ceremony do, then there would appear a peculiar significance and beauty, which would add a new interest and new value to tho service.

Rev. T. B. Thayer, of Boston, said the occasion was full of suggestions. First, this universal temple-building is significant of much. In all ages and all countries— whether among Hottentots and negroes or civilized races, or whether they be the caves of India and Ceylon, the granite piles of Nubia and Egypt, the splendid structures of Rome or the Acropolis at Athens are an imperishable testimony to this noble temple-building sentiment of man's nature. It betokens a certain religious feeling in all men, of which this temple-building is the grand exponent, The speaker alluded in a vivid manner to the busy scenes of manufacture and commerce all about us, and said that these manifested the body of man, but the Sabbath bells and the people crowding the sanctuary indicated the higher and holier nature of man. The laying of this stone is a simple recognition and acknowledgment of our belief in the great divine truths. In concluding, he said the society needed no congratulations, for its own noble contemplated work was its congratulation. The best and most enduring of earthly foundations has been laid to-day, but let us not forget that great spiritual foundation, so that when this work is completed we may lift up our voices in praise. The exercises closed with the doxology and a benediction.

The procession was then again formed and moved through the principal streets of that part of the city which had not been previously visited, to the Masonic Hall, where the Knights were dismissed and the Grand Lodge closed.

It is gratifying to be able to say in this connection, that on the return route, the procession halted in front of the residence of the venerable Brother Robert Lash, Esq., when the officers of the Grand Lodge paid him the compliment of a formal and fraternal visit, and were received with that courtesy and hospitality for which our aged Brother has ever been distinguished. Brother Lash is a Past Commander of the Boston Encampment, and a Past Warden of the Grand Lodge, and one of the oldest Masons in this Commonwealth, having been initiated in 1801.

A call was also made at the elegant residence of Dr. Davis, Commander of Palestine Encampment.

At the conclusion of the services of the day the Grand Lodge and visiting Sir Knights partook of a collation provided by the liberality of the Brethren of Chelsea; after which an hour or two were agreeably spent in listening toad-dresses and in social enjoyment. In fine, the whole occasion was eminently successful and satisfactory to all parties interested in it.