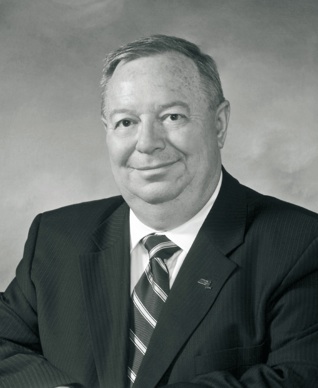 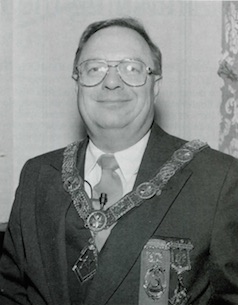 The pace and structure of American society have changed during the past 100 years, but the sense of community established by our forebears has remained strong. One of the questions often asked by a child is, "Where did I come from?" When it comes to family roots, Deputy Grand Master Roger W. Pageau has answers for his family.

The late Alex Haley did much to awaken many Americans about their roots when he wrote his book, Roots, that became more meaningful to this nation when the story was developed into a motion picture. Proof has been given that families began to research or to have somebody do the digging for them. One such researcher has been Brother Pageau who has traced his lineage from America to Canada and back to France. Roger and I both tap the roots of Louis IV of France.

There is a genealogy center in Pawtucket, R. I. that helps Canadian/Americans called the American Canadian Genealogical Association of which he is a member. "It's a lot of fun and satisfaction. But. of course, you have to be patient," he assesses his research.

Some of us like to grab the golf clubs and head for the fairways for the sheer recreation of the sport or to improve on the poor score we posted the last time out. Roger goes us one better. He makes golf clubs as another hobby, minus the frustration golfers get when making a poor shot.

Freemasonry is a meaningful part of his life. "It encompasses many of the principles and ideas which are important to me, including respect for and service to God, my country and my fellow man. There are few organizations where one can experience the friendships I have made and continue to make. I believe we are all fortunate to live in a country that tries to extend to its citizens -freedom, comfort and opportunity, and we must do everything within our capacity to extend those blessings to those less fortunate than ourselves."

When Most Worshipful Arthur E. Johnson advanced from Senior Grand Warden to Grand Master he chose R .W. Roger W. Pageau. the District Deputy Grand Master of the Natick 23rd, to be his Deputy Grand Master. A Past Master of John Warren Lodge of Hopkinton, the town made more famous as the starting point of the annual Boston Marathon, and also a charter member of Rose of Sharon Lodge of Worcester, where he is an associate treasurer and a member of the board of trustees.

Married to the former Thelma M. Chouinard, the couple has two daughters. Amy is a sophomore at the University of New Hampshire where she majors in biochemistry. Gayle is a sophomore and National Honor Society student at Algonquin Regional High School where she is an active member of the cross country team. Mother and dad are attracted to her track meets.

The family home is in Northboro where they are affiliated with the Trinity Church and where Brother Pageau is active in the Central Massachusetts Chapter, American Red Cross. He is a past president and director of the Treasury Management Association of New England and holds membership with New England Historical Genealogical Society. A native of the Granite State and a 1962 graduate of Littleton High School and 1968 graduate of the University of New Hampshire where he earned his B.S. in business management, he is presently manager, banking and cash management for New England Power Service Company of Westboro. What else attracts this North country family? Skiing, what else, and winter 1996 filled their cup to overflowing.

Brother Pageau was born in Littleton, New Hampshire on August 31, 1944, the son of Armen and Arlene Pageau and passed to the Celestial Lodge above at the University of Massachusetts Medical Center, in Worcester, Massachusetts on July 28, 2012 at the age of 67 years, 330 days.

He was educated in the Littleton, New Hampshire Public Schools and attended the University of New Hampshire from which he graduated with a Bachelor of Science Degree in Business Management.

He retired in 2003 from National Grid, formerly New England Electric, after 35 years of service and having risen to the position of Treasury Manager. Brother Pageau had many interests and hobbies, among them: Ham Radio operator wherein he enjoyed talking to many Masons and friends around the world. He also enjoyed working on the genealogy of his family tracing some roots back to France. He was an avid Boston sports fan and an ardent follower of the University of New Hampshire Hockey Team. His expert skill and craftsmanship in making custom fishing rods and golf clubs were well known among many of the Brethren.

The Masonic career of Most Worshipful Brother Pageau spread over some 36 years beginning in John Warren Lodge in Hopkinton, Massachusetts where he took his degrees, being raised to the Sublime Degree of Master Mason, March 9, 1976, and became Master of John Warren Lodge in 1987. He served our Grand Lodge as District Deputy Grand Master of the Natick 23rd Masonic District in 1994 and 1995, under the leadership of M.W. David W. Lovering. He was appointed Deputy Grand Master for the year 1996 by M.W. Arthur E. Johnson thus becoming a Permanent Member of Grand Lodge, and in the same year he was awarded the Henry Price Medal.

Brother Pageau was an affiliated and honorary member of several Lodges. He was also a member of all York Rite Bodies, serving as the Treasurer of Saint Bernard Commandery No. 12, Knights Templar; a member of Aleppo Shrine, Ancient Arabic Order of the Nobles of the Mystic Shrine in Wilmington. Also a member of the Red Cross of Constantine, a member of Massachusetts College, Societas Rosicruciana in Civitatibus Foederatis, he was serving as the Chief Adept IX at the time of his passing. Brother Pageau was a member of all the Scottish Rite Bodies in the Valley of Worcester where he served as Most Wise Master of Lawrence Chapter of Rose Croix and was also a member of Massachusetts Consistory in the Valley of Boston. He was coroneted an Honorary 33° Member of the Ancient Accepted Scottish Rite Northern Masonic Jurisdiction of the United States of America on September 2, 2002.

Brother Pageau will be remembered for his support of the many programs of our Grand Lodge, such as the Grand Lodge Scholarship Program, the Masonic Leadership Institute, the continuation of the Membership Program, his commitment to the Masonic Health System and its various endeavors as well as his service on many Grand Lodge Boards as well as the Masonic Education and Charity Trust and his devotion to youth. Brother Pageau was instrumental in the Grand Lodge providing financial support for the startup and continuing operation of the Worcester Scottish Rite Learning Center. He was also instrumental in developing a program to reinvigorate Massachusetts DeMolay which has resulted in the establishment of new Chapters as well as the reinstitution of older Chapters which had gone silent, all resulting in a dramatic increase in membership.

My Brother, we are ever grateful for your tireless service and devotion to our Grand Lodge, your always cheerful manner and your willingness to listen to and help your Brethren.

“May our Heavenly Father bless you and have you in his keeping in the Celestial Lodge above."