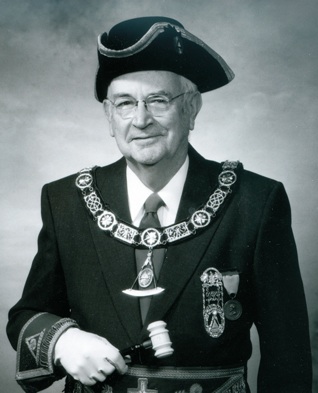 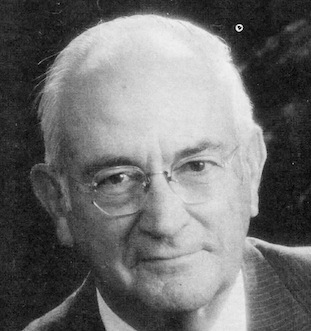 R. W. David W. Lovering brings to the office of Senior Grand Warden more than 25 years of active service to the Craft. A native of Needham where he was raised in Nehoiden Lodge in 1946, he was Master in 1960-61 and Master of the 34th Lodge of Instruction in 1975. He has been on the Speakers Bureau of the Dept. of Education for several years and in 1977-7B D. D. G. M. of the Waltham 5th District.

Bro. Lovering holds membership in The Masters Lodge, Newtonville, and in Marine Lodge of Falmouth, the town where he and Mrs. Lovering now make their home. She is the former Mildred Carlson. Their son Richard is a Past Master Councillor of the Needham DeMolay Chapter and a daughter, Judith (Mrs. Edgar L. Kleindinst), is a Senior Member of Needham Chapter Internationa] Order of Rainbow for Girls.

Prior to his retirement in 1980 he was a consultant in the product technology section of Arthur D. Little Co., and is a graduate of Northeastern Univ. class of 1943. Active in then Scouts of America for more than 50 years, he was a vice president of Boston Council, on the Region 1 Exploring Committee, representative to the National Council, and a holder of the Silver Beaver Award. He holds the Cross of Honor in DeMolay. As a boating enthusiast and licensed ham radio operator. Bro. Dave looks forward to every day as a new challenge for service. 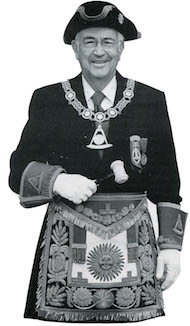 David Whitcomb Lovering of Falmouth, where he has been an active member of Marine Lodge for several years, is probably the first Cape Cod Mason to be elected and installed the Grand Master of Masons in Massachusetts. He was elected at the Quarterly Communication of Grand Lodge on December 9 and installed to office by retiring Grand Master Edgar W. Darling at the Installation of Officers and the celebration of the Feast of Saint John the Evangelist on December 28.

A native of Needham. the son of Walter and Alta (Kennedy) Lovering, he is a graduate of Needham High School and a graduate of Northeastern University in the class of 1943. Active in Boy Scouting for 50 years, he was vice president of Boston Council, the Region One Exploring Committee, representative to the National Council and holder of the Silver Beaver Award.

Raised in Nehoiden Lodge, Needham, in 1946, he was Master in 1960-61 and Master of the 34th Lodge of Instruction in 1975. A year later, he began a decade of service with the Grand Lodge Service Committee and was a founding member of the Masonic Awareness Committee. Appointed by Most Worshipful Stanley F. Maxwell, he was the District Deputy Grand Master of the Waltham Fifth Masonic District, 1977-78. He holds the Cross of Honor and the Legion of Honor in the Order of DeMolay. He received the Joseph Warren Distinguished Service Medal in 1978 and was presented the Henry Price Medal when Senior Grand Warden in 1986.

The Grand Master was a charter member of The Masters Lodge, Newtonville, in 1984 and served as its Worshipful Master 1989-90. He has been a Grand Lecturer since 1987. He has been the Treasurer of the Fifth District Past Masters Association since 1963 and is a member of the Massachusetts College, Societas Rosicruciana. In York Rite Masonry he is a member of Mt. Vemon Royal Arch Chapter of Needham, Boston Council Royal and Select Masters and St. Bernard Commandery No. 12 of Boston. All of his Scottish Rite membership is with the Valley of Boston, and he is an active degree worker in Massachusetts Consistory.

An active boating enthusiast and a licensed ham radio operator, the Grand Master is a charter member of ATARA, the Aleppo Temple Shrine ham radio club.

Prior to his retirement in 1980, he was a consultant with Arthur D. Little. Inc. of Cambridge where he worked for almost 40 years as a chemist. During World War II, he served in the Army of the United States. He is the Grand Representative of the Grand Lodge of New Zealand near the Grand Lodge of Massachusetts.

Married to Mildred (nee Carlson), the couple has two children: Richard is a Past Master Councilor of Needham Chapter. Order of DeMolay and a member of Marine Lodge, Falmouth, where he was Raised by his father when acting as Grand Master during his term of Senior Grand Warden in 1986. Their daughter, Judith, is the wife of Worshipful Edgar L. Kleindinst, III, who is a Past Master of Marine Lodge. Judith is a Senior Member of Needham Assembly, International Order of Rainbow for Girls.

As Most Worshipful David W. Lovering assumes the leadership of the third oldest Masonic jurisdiction in the world, he will work in an almost totally-computerized Grand Lodge. Although the Grand Secretary's office has been computerized for some time, Comptroller Robert Blake is now in the process of putting the financial records in computer while the Grand Lodge Library will prepare to computerize its thousands of books, periodicals and files.

He attended the Needham public school system and graduated from Needham High School with the class of 1939. Active in track at Needham High, in 1939 he set a new track record for the one mile run, he also played the euphonium (horn) in the high school band.

After high school he attended Northeastern University, graduating in 1943 with a Bachelor of Science Degree. During his time at Northeastern he played in the school band and did his cooperative work at Arthur D. Little, Inc. of Cambridge where he took up full time employment following his graduation from Northeastern. He worked as a consultant in paper and printing and was the holder of many patents in these fields.

In 1950 he married the former Mildred Carlson and became the father of two children, a son, Richard Lovering of Falmouth and a daughter, Judith (Lovering) Kleindinst, III of North Falmouth. He retired in 1980 and moved from Needham to Falmouth where he enjoyed being closer to his family and sailing. In his retirement he most enjoyed his travels to Sweden.

Brother Lovering had many interests and hobbies among them: DeMolay Advisor to Needham Chapter, active in Boy Scouting for over 50 years, he was Vice President of Boston Council, Region One Exploring Committee representative to the National Council and holder of the Silver Beaver Award. He was an active boating enthusiast, (Blue Hill Power Squadron), a ham radio operator and Past President of Falmouth Ham Radio Association.

His Masonic career began in Nehoiden Lodge in Needham where he took his degrees. His degrees were interrupted by time spent in the Army, but he completed his degree work soon after his discharge. He was raised on December 17, 1946, became Master in 1960 and served as Master of the 34th Lodge of Instruction in 1975. He served our Grand Lodge as District Deputy Grand Master of the Waltham 5th Masonic District in 1977 and 1978, was elected Senior Grand Warden in 1986 in which year he was awarded the Henry Price Medal. He was a Charter Member and Past Master (in 1989-90) of The Masters Lodge and was an affiliated and honorary member of several Lodges. He was elected to be the 80th Grand Master of the Grand Lodge of Masons in Massachusetts for the years 1993, 1994, 1995.

He was also a member of Mount Vernon Royal Arch Chapter, Boston Council of Royal and Select Master Masons, Saint Bernard Commandery No. 12, Knights Templar, Aleppo Temple, Ancient Arabic Order Nobles of the Mystic Shrine in Wilmington. A member of the Red Cross of Constantine, and the Societas Rosicruciana in Cibitatibus Foederatis serving as the Celebrant VIII°. Brother Lovering was a member of all the Bodies in the Valley of Boston, being a very active worker in Massachusetts Consistory fulfilling several major parts and was an Aide to the Commander in Chief. He was Coroneted an Honorary 33° Member of the Ancient Accepted Scottish Rite Northern Masonic Jurisdiction of the United States of America at Cleveland, Ohio in 1994.

Brother Lovering was instrumental in the development and start of the Masonic Awareness Program as early as 1988 and in his term as Grand Master, the Grand Lodge Scholarship Program was instituted along with the reorganization of the various Boards of Grand Lodge, the recognition of Prince Hall Grand Lodge of Massachusetts and the start of the FLIC Program.

“May you long be remembered for your dedication to and love of Masonry and may God ever have you in His heavenly keeping”.

"A society grows great when old men plant trees whose shade they know they shall never sit in." - Greek Proverb

Brother David Lovering left us on October 16, 2009. He was 88 years old. He was initiated into Freemasonry exactly 64 years before - to the day. When he was elected Grand Master of Masons in Massachusetts in 1993. he was 72 years of age: not exactly young, but not old by today's standards either. Let us simply say that he was a senior citizen.

Who was this man? He was, for sure, a man with both feet planted firmly on the ground. His Grand Marshal, Rt. Wor. E. Joel Peterson, describes him as, "An old school Mason; someone who demanded excellence of himself and others." He was known as an expert - perhaps the foremost expert - on Masonic protocol and ritual in the jurisdiction. He was a detail-oriented man, a perfectionist.

I learned this about him firsthand. The very first letter I received as Trowel editor was from Brother Lovering. It began well enough, "Congratulations!", but continued, "However I would point out a problem in protocol. On page 8 you say "Rt. Wor (Last Name) . . . that is poor form and bad English." There must be 500 Masonic titles in every issue of Trowel. "How did he find this lone mistake?" I moaned.

But, there was another dimension to this man. He was a man who planted trees for others to enjoy. He was a "visionary" as Grand Master Pageau commented. His close friend, Rt. Wor. Bro. Peterson says, "I never met anyone who thought more outside the box." This trait was reflected in the two achievements he was especially proud of - the Grand Lodge scholarship program, and official recognition of the Prince Hall Grand Lodge - as well as in his efforts to institute a long range plan for Massachusetts Masonry.

Our scholarship program began modestly during Bro. Lovering's second year as Grand Master. Rt. Wor. James R. Franklin, the first scholarship program chairman, recalls the Grand Master's attitude being that helping young people, especially those that really needed financial help, get an education was the most important thing we could be doing for our members. Brad Owen, one of the first five students to receive a grant, said, "Just being admitted to Notre Dame was a dream come true, but without the aid of the Masonic scholarship, Notre Dame might not have become a reality for me." The program has grown from flve grants the first year, to 76 grants In 2009 and has cumulatively dispensed $4.5 million in scholarships to young men and women just starting out in life. Quite a nice little tree, Bro. Lovering!

Two hundred years after its founding, our Grand Lodge recognized the Prince Hall Grand Lodge of Massachusetts as a regular Masonic body. In 1995, Bro. Lovering embraced this development. "He was delighted that it finally happened during his watch", said Bro. Peterson. Thirty-one states have followed us. Another much-needed tree, Bro. Lovering!

The committee structure that we take for granted today didn't exist at all not so long ago. Beginning with the Vision Statement published in 1995, and then with the first long range plan work, he propelled our fraternity forward. "Don't talk about how we will get there," said Grand Master Lovering, "talk about where we want to get to." yet another tree for others to enjoy, Bro. Lovering!

I have thought of this man each time I type a Masonic title. In the future I will privately say, "Thank you for the shade, Bro. Lovering."