Dispensation may have been presented to Grand Master Sanford sometime in 1903.

Current Status: dispensation declined, but there is no documentation on it. 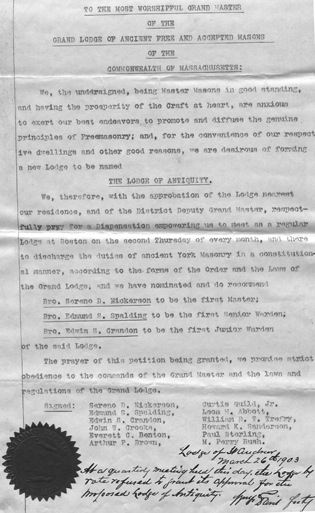 The petition for the Lodge of Antiquity, 1903

In March 1903, an extremely distinguished roster, including a Past Grand Master and two future Grand Masters, signed a petition for a dispensation for a new lodge in Boston called the Lodge of Antiquity. The petition (shown above) contains an endorsement by the Lodge of St. Andrew, but no other signatures or acknowledgements.

Though the recommended first Master, Brother Sereno Nickerson, was Grand Secretary at the time, there is no definite indication that the petition was ever presented and either approved or declined.