Difference between revisions of "MANAttleboroGraceEp" 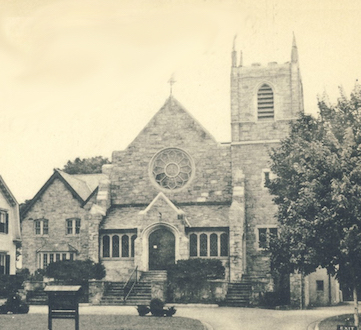 LAYING THE CORNER-STONE OF A CHURCH.

The corner-stone of Grace (Episcopal) Church, at North Attleboro, Mass. was laid by the Grand Lodge of this Commonwealth, with ma sonic ceremonies, on the 14th of June. The occasion was one of much significance and peculiar interest. Bristol County, of which  Attleboro is one of its most flourishing towns, was the hot bed of anti- masonry during the reign of that fanatical crusade against our Institution, and the above is, we believe, the first time that any of the Lodges in the County have since been called upon to perform any masonic duty in public, except perhaps to attend the funeral of some deceased j brother. It therefore very naturally created quite an interest and  called together a large congregation of spectators from the neighboring  villages, while in the town itself it was quite a holiday. The procession was formed at an early hour, and consisted of the M. W. Grand  Lodge, with a full board of officers; of Bristol Lodge, under whose auspices the ceremonies were conducted; and of Ezekiel Bates Lodge, and visiting brethren, the whole under the escort of Bristol Com-mandery, a fine body of Knights, who performed their duty in a man ner creditable to themselves and to the occasion.

The procession moved through the principal streets of the town to the site of the new church, where, after the usual church services by the Rector and his assistants, the corner-stone was laid by Grand Master Nickerson in accordance with the prescribed forms of Freemasonry ; at the conclusion of which the procession was again formed, and returned to the place of. starting, where the brethren were dismissed; but were soon after called to dinner at the Wamsutta House. What occurred there it is not necessary to mention, except that after the feast was disposed of, the company, consisting of about three hundred, including the ladies, were addressed by the Master of the Lodge, by Grand Master Nickerson, Rev. Dr. E. M. P. Wells, Rev. Charles H. Titus, and others, and at an early hour the Grand Lodge returned to the city, and the Brethren to their homes. The occasion was a very agreeable one, and we doubt not that its influence was healthful.