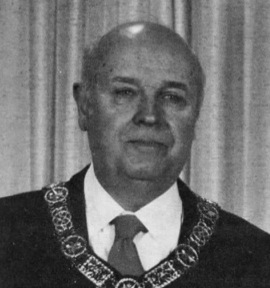 Again, the all-devouring scythe of time has cut the brittle thread of life and taken from us a much-beloved member of the Craft, R.W. Brother Oman Reynolds Price, who was born in New Bedford, November 29, 1915, and died at the age of 82 in New Bedford, January 2, 1998. He was the son of the late Ralph Kay Price, Sr., and Mabel (Oman) Price. He was the widower of Irene A. (Leach) Price, who had died in April, 1997.

A Masonic funeral service, followed by a memorial service, was held at the Mattapoisett Congregational Church on Saturday, January 31, 1998, attended by a church-filling congregation, with the Reverend Oscar A. Guinn, Jr. giving the eulogy.

A 1935 graduate of New Bedford High School, Oman Price graduated from Lee Institute of Real Estate in 1963, becoming a real estate broker. For more than 50 years, he owned and operated General House Repairs. During World War II, he served as a major in the Massachusetts State Guard in charge of the 28th Infantry, 2nd Battalion, covering the area from Wareham to Norton. For 41 years he worked for Revere Copper and Brass in New Bedford, retiring in 1977 as chief inspector of quality control.

Masonically, Oman Price had a fulI and fruitful life, serving as Master of Eureka Lodge in 1960 and again in 1968. He was also a member of Quittacus and Abraham H. Howland Jr. Lodges. He served as District Deputy Grand Master of the Fall River 30th Masonic District in 1965-66, and as Senior Grand Warden in 1982. He had received the Henry Price Medal.

In York Rite Masonry, he served as High Priest of Wareham Chapter in 1959 and 1994-95, High Priest of Adoniram Chapter in 1975, and Grand Scribe in 1974. He had received the Benjamin Hurd Medal for distinguished service. In New Bedford Council he served as Illustrious Master in 1951-52. In Sutton Commandery he was Eminent Commander in 1955 and 1957. He was also a member of Roger Williams Priory #48, Knights of the York Cross of Honour.

In the Ancient Accepted Scottish Rite Valley of Southeastern Massachusetts Oman Price served as Sovereign Prince, Princes of Jerusalem, in 1974-77, and as Commander-in-Chief of the Old Colony Consistory in 1977-80. He also received the 33° in Cleveland, Ohio, on September 24, 1980.

Oman Price was also a member of other Masonic-affiliated bodies, including Narragansett Bay Chapter #14, National Sojourners, and had served as Dad Advisor for the New Bedford Chapter of Rainbow Girls, and had received the DeMolay Honorary Legion of Honor.

His zeal in Masonry never slackened. He was outstanding in his 13 years as Grand Lecturer. Being very proficient himself, he expected the same from those with whom he was working. He also realized the limitations of others, willingly aided them by quieting their nervousness, and gave advice on preparing for future exemplifications, for which many Masons were very grateful.

Oman Price possessed the quality of making and keeping friends. Loyal and devoted, full of energy and enthusiasm, earnest in his convictions, his contributions to the fraternity in all its branches was valuable and constructive. He had a deep sense of responsibility to Freemasonry and was ever responsive to the call of duty.

From Proceedings of the Massachusetts Council of Deliberation AASR NMJ 1998, Page A-xii:

Ill. Oman Reynolds Price was the son of Ralph K. Price, Sr. and Mabel (Oman) Price. He was educated in the New Bedford Public Schools. He served our country in the Massachusetts State Guard during World War II. For more than fifty years he owned and operated the Oman R. Price Caretaker and General House Repairs.

In 1941, at New Bedford, Massachusetts, he was united in marriage to Irene A. Leach, who passed away on April 1, 1997. Survivors include two daughters, Shirley K. Cunningham of Halifax and Linda P. O'Keefe of Lexington, and two sons, David R. Price, Sr., of Fairhaven and 0. Robert Price of Mattapoisett.

He was a member of the Valley of Southeastern Massachusetts and served as Sovereign Prince from 1974 to 1977 and Commander-in-Chief from 1977 to 1979. He was a Past Minister of State with the Massachusetts Council of Deliberation and was created a Sovereign Grand Inspector General, 33°, Honorary Member of the Supreme Council, on September 24, 1980, in Cleveland.

He was a member of Palestine Temple, A.A.O.N.M.S. in Rhode Island and the Southeast Shrine Club of Massachusetts.

Memorial and Masonic Services were held at the Mattapoisett Congregational Church at I 0:00 a.m. on Saturday, January 31, 1998. Interment will be at Cushing Cemetery in Mattapoisett at the convenience of the family.