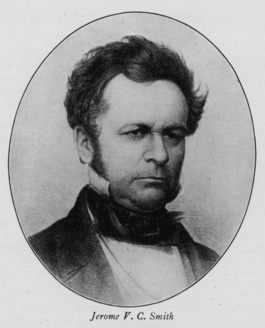 "The committee on the death of R.W. Jerome V. C. Smith ask leave to report. In the feeling of kindness and sympathy found in the bosom of sanctified affliction, our Fraternity are ever ready to render the last honors to their dead ; and as on the bier of a deceased Brother they drop the emblem that reminds us of the immortality of the soul, they seek to comfort others with the same consolations with which they themselves have been comforted of God. In the fulness of years and honors our R.W. Bro. Smith departed this life at Richmond, Mass., on Wednesday, August 20th, last. He was born at Conway, N.H., in the year 1800, being at the time of his death in the eightieth year of his age. He entered Brown University, but was graduated from Williams College in 1822. He afterward received the honorary degree of M.D. from Brown University. His professional instruction was received in this city, and for many years, being about the same age, he was professionally the friend and associate of our late Brothers Winslow Lewis, John Flint, and others.

"For nearly a quarter of a century he was Port Physician of Boston, having charge of Rainsford Island Hospital, and to him have our authorities rendered the praise, so well-deserved, of having inaugurated more liberal arrangements and better facilities of every kind to alleviate the pains and lessen the dangers of the most loathsome disease to which mortal flesh is heir; for to him we are indebted for the entire revolution which has been brought about in its treatment. The improvements instituted by him will grow strong by age, and many a poor sufferer, like the writer of these memoirs, will long revere his memory and call him blessed. The many living witnesses who owe to his skill and culture the lives they enjoy in their rescue from the most terrible of all diseases, will bear their testimony that the good which an able and skilled physician is able to accomplish in half a century of practice can never be over-estimated. The literary ability of our late Brother was frequently evinced in the authorship of many valuable medical treatises, and after his return from the Holy Land he published his Travels in Palestine. His lectures delivered before the Masons of Boston, on the scenes around Jerusalem; the stones which he brought and exhibited from the Temple of Solomon, and the minute description which he gave of the quarries from which they were raised, will long be remembered by those whose privilege it was to listen to him.

"In 1854 he was elected Mayor of Boston, and held the office for two years; but was more at home in his literary and professional character than in that of a politician. Since 1860 he has resided in New York, and being so little among us, few of the Masons of this day know much of him from personal acquaintance. In the late war he was active in the Sanitary Department, and was appointed Inspector General to consider the sanitary condition of the city of New Orleans. Dr. J. V. C. Smith was a man of great energy and persistency of character; he was called to fill many places of trust and responsibility, and in them all was characterized by the most faithful devotion to the best interests of those who placed him in them, his highest wish being to perform faithfully and well his whole duty as a citizen of this great American Republic.

"R.W. Bro. J. V. C. Smith has held various responsible offices in this Grand Lodge, and was a permanent member of it for many years; he was appointed by M.W.G. Master Randall, in 1851-2-3, D.D.G. Master of the First Masonic District, and by M.W.G. Master Lewis, Deputy Grand Master, Dec. 27, 1859. He was buried on the 22d of August last, at Pittsfield, where repose the remains of his wife. He has left an only son to mourn his loss and to reverence his memory. Thus has ended a useful life, filled with kindness and helpfulness to his fellow-men, and the conscientious performance of duty to God, his neighbor, and himself. He has joined the goodly company of our sainted Brethren, with whom he spent so many happy years, professionally and Masonically, to be no more separated from them forever. In the beautiful language of R.W. Bro. Cheever, on a late occasion, but equally applicable here, — Doubt not, my Brethren, that in ampler ethers, on higher planes of activity, in wider spheres of brotherhood, his life is warmed by the breath of the Divine Spirit, to which he has returned, and brightened in the glow of the eternal love.

"Weep not then for him who, having won
The bound of our appointed years, at last,
Life's blessings all enjoyed, life's labors done,
Serenely to his final rest has passed;
While the soft memory of his virtues yet
Lingers, like twilight dews when the bright sun is set."

"Therefore Resolved, That in the death of one of our permanent members, R.W. Bro. Jerome Van Crowninshield Smith, this Grand Lodge has sustained the loss of a Brother who has filled many of its most important offices with zeal and fidelity, and whose example of devotion and brotherly sj'mpathy will have an enduring place in our hearts and memory.

"Resolved, That this tribute of affectionate remembrance be entered at length on the Records of the Grand Lodge, and a copy of these proceedings, when printed, be forwarded to his son, Dr. Edward Smith, of New York City."