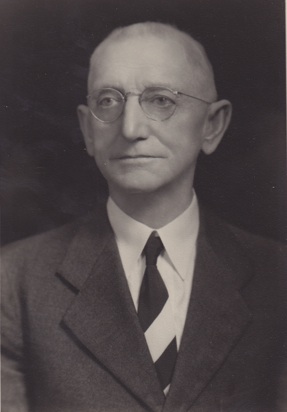 He was educated in the public schools of Orleans and his many and varied interests centered there throughout his long and useful life. He was very active for years, not only in Masonry, but in the civic and business interests of his community.

He was a member of Sylvester Baxter Chapter, R. A. M., of West Harwich, New Bedford Council, R' & S'M', DeMolay Commandery, K.T., of Boston, and of the Scottish Rite Bodies in Boston. He gave freely of his time to Craft Masonry but never held office in any of the collateral bodies.

Brother Kenrick was never married and spent his entire life in the home in which he was born.

To the Committee on Memorial is left the task of fittingly expressing an appreciation of him and of the varied and valued services that he rendered to Freemasonry and to the community at large.

Funeral services were conducted by Universal Lodge at the Universalist Church in Orleans on Tuesday, JuIy 7, 1942.

Right Worshipful John Kenrick passed away on Friday, July 3, 1942, at the ripe age of eighty-five. Yes, eighty-five years of love and devotion to his fellowman.

Brother Kenrick was in the general mercantile business from 1891 to 1935, succeeding his father who established the business in 1865, and was also in the real estate business. In his later years, he was President, Trustee and members of the Board of Investments, Cape Cod Five Cents Savings Bank of Harwich.

Brother Kenrick was intensely interested in goodgovernment, devoting much of his life to town and state affairs - Selectman, Assessor, Overseer of the Poor, Board of Health, 1900 to 1911, Moderator of Town meetings at intervals from 1894 to 1937. He was instrumental as Assessor in lowering the Orleans tax rate to $3.00, which at that time was the lowest in the State. He was postmaster at South Orleans from 1899 to 1935, thirty-seven years; Secretary of the Republican Town Committee, 1892-1909; member of the Massachusetts House of Representatives, 1891; member of the Senate, 1893-1894, and as Senator, assisted in securing legislation creating the Massachusetts Highway Commission, Metropolitan Park Commission for Boston, a State MArine Park out of the "Province Lands" of Massachusetts, and additional State Normal Schools.

Brother Kenrick was a member of the Universalist Church, Odd Fellows and Republican Club of Massachusetts.

He was a charter member of Universal Lodge, Orleans, constituted in 1917; Worshipful Master for 1920 and 1921 and Chaplain from 1922 until his death with the exception of one year.

He was appointed District Deputy Grand Master of the 32nd Masonic District in 1923 and 1924 and elected Junior Grand Warden in 1935.

He became a member of Boston Lafayette Lodge of Perfection, February 2, 1934; Giles F. Yates Council, Princes of Jerusalem, February 9, 1934; Mount Olivet Chapter of Rose Croix, February 16, 1934, and Massachusetts Consistory, February 23, 1934. He held no office in any of these bodies.

Brother Kenrick was a raw-boned Yankee of old Colonial stock, tall of stature, quick and alert, a face of inherited character, kindly sympathetic eyes, depict this nature's nobleman. He was revered and respected by all who knew him.