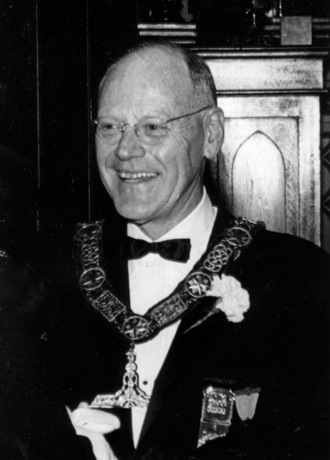 "In 1924, he entered the insurance business as a broker being associated with the Massachusetts Protective Association for 39 years, retiring in 1963. He married Dorothy Dudley Smith in 1927 and three children were born of this union.

"Right Worshipful Brother Cummings was raised in Brookline Lodge on November 17, 1921; was first Master {n 1929, Marshal from 1931 to 1935 and served faithfully as its Secretary from 1935 to 1971, a period of 36 years. He was elected an Honorary Member in 1944 and served as Historian for the Lodge 25th Anniversary in 1946 and again for the 50th Anniversary, in 1971. He also served as anniversary historian for Simon W. Robinson Lodge, Lexington; Mizpah Lodge, Cambridge; Rural Lodge, Quincy; Rabboni Lodge, Dorchester; Boston Lalayette Lodge of Perfection, A.A.S.R.; the Masonic Secretaries Association of Massachusetts, of which he was a Past President and for Aleppo Temple, A.A.O.N.M.S. He was a Charter Member of the 34th Lodge of Instruction and was its Master in 1934.

"In Grand Lodge, Right Worshipful Brother Cummings was Junior Grand Steward in 1935; Senior Grand Deacon in 1944 and was elected Senior Grand Warden in 1965, the second highest elective office in Grand Lodge. He was appointed Grand Representative of the United Grand Lodge of Victoria near the Grand Lodge of Massachusetts in 1951 and was a member o{ our Grand Lodge Committee on Restorations and Reinstatements. He was awarded the Joseph Warren Medal for Distinguished Service by Grand Lodge in 1941; the coveted Henry Price Medal in 1965 and the Veteran's Medal in 1971.

"In the Collateral Bodies, Right Worshipful Brother Cummings was exalted in Saint Paul's Royal Arch Chapter, June 18, 1926; greeted in Boston Council Royal and Select Masters, May 24, 1946 and Knighted in DeMolay Commandery No. 7, Knights Templar on June 29, 1949, serving as Recorder in 1950-51 and 52. He received his Scottish Rite Degrees in the Valley of Boston in 1923 and was created I Sovereign Grand Inspector General, 33°, Honorary Member of the Supreme Council, on September 23, 1959. In Massachusetts Consistory he served as Associate chancellor; Editor of the Scottish Rite Bulretin and historian for the 100th Anniversary in 1960. He held the office of Orator of the Boston Lalayette Lodge of perfection for many years.

"Right Worshipful Brother Cummings received the Massachusetts Council of Deliberation Award of Merit in 1957 and the DeMolay Legion of Honor (Honorary) was conferred in 1958. He is the author of four books: Living Thoughts, published in 1966; Inner Strength, published in 1973; Foundations, published in 1976 and, Pathways published in 1977. He has always been interested in Archery serving as Chairman of the Board of Governors of the National Archery Association of the United States from 1937 to 1947. In 1942, he was awarded the J. Maurice Thompson Medal for Distinguished Service to Archery.

"Right Worshipful Brother Cummings was active in the St. Paul's Episcopal Church, Brookline and was one of the founders of the Young Peoples Fellowship (Episcopal) in Massachusetts in 1920. He was also active in the Boy Scouts organization for 25 years and in many other civic and political organizations. His was an active life of service to his fellowman and his cheery smile and kind personality wilt be missed by all who were privileged to know him.