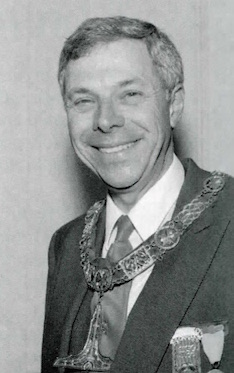 Since 1978 when he was raised in Marine Lodge in Falmouth, Right Worshipful E. Joel Peterson has had a busy fraternal and business life, just now slowed down a little from his duties as Grand Marshal for three years. It has been the custom for this Grand Lodge to elect the retiring Grand Marshal to the office of Senior Grand Warden, uncontested. While serving Most Worshipful David W. Lovering he has been elected to honorary memberships in Mt. Tom and Mt. Holyoke Lodges and Oneonta Lodge No. 466 of New York. He is an affiliate of The Masters Lodge and Norumbega and Brookline Lodge. He was appointed the Grand Representative from the Grand Lodge of China near the Grand Lodge of Massachusetts.

A graduate of the Statler School of Hotel Administration at Cornell University, he is the president and general manager of the Nautilus Motor Inn at Woods Hole. Married to Susan, they are the parents of a son Neil, 29, who lives in ski country (Aspen, Colorado) and a daughter Kristen, 26, who resides in the warmer climate of Vero Beach, Florida, once the famous training town of the old Brooklyn Dodgers when baseball really was the national pastime.

A member of St. Barnabas Episcopal Church of Falmouth, he has been a director of the town's Chamber of Commerce and president of the Chamber at Hyannis. He is a corporator of the Woods Hole Foundation and associate of the Marine Biological Laboratory, trustee of Treetops Condominium Trust, active with Falmouth Hospital and member of the board of investment of the Plymouth Savings Bank of Middleboro. Whenever they fit into his busy fraternal and business lifestyle he hobbies with boating and photography.